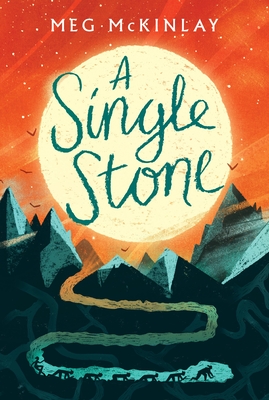 In an isolated society, one girl makes a discovery that will change everything — and learns that a single stone, once set in motion, can bring down a mountain.

Jena — strong, respected, reliable — is the leader of the line, a job every girl in the village dreams of. Watched over by the Mothers as one of the chosen seven, Jena's years spent denying herself food and wrapping her limbs have paid off. She is small enough to squeeze through the tunnels of the mountain and gather the harvest, risking her life with each mission. No work is more important. This has always been the way of things, even if it isn’t easy. But as her suspicions mount and Jena begins to question the life she’s always known, the cracks in her world become impossible to ignore. Thought-provoking and quietly complex, Meg McKinlay’s novel unfolds into a harshly beautiful tale of belief, survival, and resilience stronger than stone.

Praise For A Single Stone…

The prose flows gracefully, like rivulets down a mountainside. Like its classic predecessors, Nan Chauncy's Tangara (1960) and Patricia Wrightson's The Nargun and the Stars (1974), this Australian novel explores the ways in which identity is tied to the land one inhabits. A beautiful, sparkling gem.
—Kirkus Reviews (starred review)

In this haunting Australian import, the survival of an isolated village depends on the ability of small girls to find mica deep within a nearby mountain...In addition to the book’s compelling story, McKinlay’s writing style is brilliantly poetic and spare, a perfect fit for this world where the economy of words is a necessity when life is spent in spaces where oxygen is at a premium.
—Bulletin of the Center for Children's Books (starred review)

Tension twists through the narrative in the claustrophobic mountain passages, the polite yet oppressively controlled society, and Jena’s risky rebellion. Action is minimal, but detail-oriented readers who like stepping into a carefully crafted world will find plenty to ponder in this book’s pages.
—Booklist

McKinlay’s stark yet effective prose and layered world-building, reminiscent of the dystopian societies created by Margaret Atwood, combine in a haunting novel that will stay with readers. Younger readers ready to tackle the heavy subject matter will join older YAs in delving into this unusual, evocative title recommended for both middle and high school collections.
—School Library Journal

McKinlay (Below) believably evokes the dangers inherent in Jena’s burgeoning autonomous thoughts and actions in a tightly controlled dystopian environment where her grace and power ultimately prevail.
—Publishers Weekly

This is an elaborate piece of world-building...what keeps the narrative dynamic are the characters, limned in spare prose but completely convincing, and an original setting that is specific in its every detail and mythic in its effect. The first sentence induces claustrophobia, and it never lets up as tension builds.
—Horn Book

Meg McKinlay is the award-winning author of Below. She divides her time between teaching and writing, a balance that swings wildly between chaos and calm. She lives near the ocean in Fremantle, Australia.
Loading...
or support indie stores by buying on