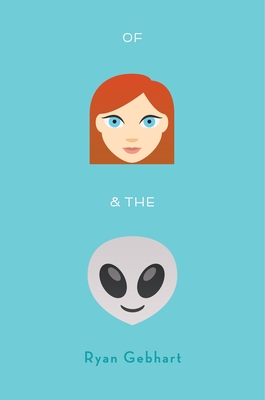 Of Jenny and the Aliens

When boy meets girl meets alien, the angst of first love gets an extraterrestrial intervention in a tale both outrageously funny and full of heart.

Ten years after Earth sent messages out into deep space, there has been an answer. Music from a distant planet has reached our radios. Are aliens about to invade? No one knows, and almost-eighteen-year-old Derek doesn’t really care, because at a wild end-of-the-world party, Jennifer Novak invites him to play beer pong. And things . . . progress from there. Derek is in love. Deeply, hopelessly in love. He wants it all—marriage, kids, growing old on a beach in Costa Rica. Jenny is The One.
But Jenny has other plans, and they may or may not include Derek. He’ll try anything to win her—even soliciting advice from the alien who shows up in his hometown. This alien might just be the answer to Derek’s problem. But is Derek willing to risk starting an interstellar war just to get the girl? And just how far will he travel to discover the mysteries of the universe—and love?

Praise For Of Jenny and the Aliens…

This perfectly off-kilter love story is ideal for jaded, philosophically minded teens as well as those who would appreciate the madcap genius of stealing shopping carts to turn them into gaming chairs.
—Booklist (starred review)

Teens should find his confusion about romantic, fraternal, and familial love relatable, and Gebhart keeps the love story fresh with aliens, interstellar hallucinogens, and surreal imagery, including one long sequence in which Derek follows Karo to Pud 5. Recommended for adventurous YA readers, especially those looking for a realistic teen male voice.
—School Library Journal

Aliens from Alpha Centauri have made first contact, and everyone on Earth is on edge. But amid fears that it’s the end of the world, 17-year-old Derek is focused on his crush, Jenny...As these two storylines intertwine, the juxtaposition of Derek’s dizzying rush into first love and a potential alien invasion touches off some of the same base instincts in Gebhart’s characters.
—Publishers Weekly

Of Jenny and the Aliens by Ryan Gebhart (There Will Be Bears) is a hilarious and wildly imaginative romp through first love and first contact. Gebhart's characters are realistic and their actions and reactions believable...Gebhart's aliens are a breath of fresh air, particularly Karo and his odd penchant for the Cleveland Browns and all things humanity-related. Gebhart's bold, slightly crude humor is a highlight in this wonderfully entertaining and memorable tale not to be missed.
—Shelf Awareness for Readers

Ryan Gebhart is the author of the middle-grade novel There Will Be Bears. About Of Jenny and the Aliens, he says, “This book is not autobiographical in any way . . . except for that one time I smoked up with an alien.” Ryan Gebhart lives in Ohio.
Loading...
or support indie stores by buying on