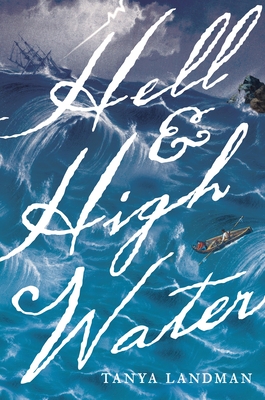 Mystery turns to mortal danger as one young man’s quest to clear his father’s name ensnares him in a net of deceit, conspiracy, and intrigue in 1750s England.

Caleb has spent his life roaming southern England with his Pa, little to their names but his father’s signet ring and a puppet theater for popular, raunchy Punch and Judy shows — until the day Pa is convicted of a theft he didn’t commit and sentenced to transportation to the colonies in America. From prison, Caleb’s father sends him to the coast to find an aunt Caleb never knew he had. His aunt welcomes him into her home, but her neighbors see only Caleb’s dark skin. Still, Caleb slowly falls into a strange rhythm in his new life . . . until one morning he finds a body washed up on the shore. The face is unrecognizable after its time at sea, but the signet ring is unmistakable: it can only be Caleb’s father. Mystery piles on mystery as both church and state deny what Caleb knows. From award-winning British author Tanya Landman comes a heart-stopping story of race, class, family, and corruption so deep it can kill.

Tanya Landman is the Carnegie Medal–winning author of a number of historical novels for young adults, including The Goldsmith’s Daughter and I Am Apache, in which she explores the lives of history’s dispossessed and disenfranchised. Tanya Landman lives in Devon, England.

Praise For Hell and High Water…

The author's concise descriptions of the sea's frightening vastness, the confining and insulated spirit of the small English town, and the provincial xenophobic attitudes of its denizens are almost cinematic in scope. Often mistaken for a slave, Caleb must endure whispers and pointed racism that are as historically accurate as they are disheartening. So riveting that the pages seem to turn of their own accord.
—Kirkus Reviews (starred review)

Suspenseful from first page to last, the book delves into racism, class structure, and the abuse of power while highlighting one unprivileged adolescent’s attempt to beat a corrupt system. Landman brings to life the sights, sounds, and injustices of a bygone era and is just as attentive to Caleb’s strong emotions as his life becomes increasingly dangerous.
—Publishers Weekly (starred review)

This story is both a taut mystery and an excellent piece of historical fiction that brings issues of class, race, and justice into sharp focus. The compelling, complex characters come to life through Landman’s sophisticated writing, and the plot’s many twists strike like expertly timed smacks from Punch’s slapstick.
—Booklist (starred review)

Caleb discovers a body on the beach wearing the same unique signet ring his father wore every day. The discovery leads Caleb and his new family to start questioning the activities of Sir Robert and what (or who) is on the ships he owns. The plot picks up after the discovery of the body and the mystery becomes more established.
—School Library Connection

The harshness of 18th-century life is brutally portrayed, from catastrophic illnesses to the merciless power of nobility. Caleb’s strength and courage help him endure painful treatment; numerous heart-pounding close calls are exciting and taut with tension...recommended for those looking to add to their YA historical fiction shelves.
—School Library Journal

This excellent melding of historical fiction and adventure/thriller pays the meticulous attention to period and character detail that pleases fans of the former while delivering the grave digging, shipwrecks, and hairsbreadth escapes that entertain the latter...this tale of eighteenth-century upper-crust crime is bound to please.
—Bulletin of the Center for Children's Books

This richly detailed, beautifully written novel was inspired by the true story of Thomas Benson, a wealthy land owner and merchant trader, member of Parliament and notorious smuggler and fraudster.
—Buffalo News
or support indie stores by buying on
Copyright © 2020 American Booksellers Association