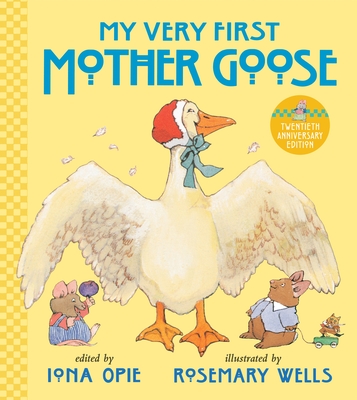 Twenty years after Iona Opie and Rosemary Wells released their first collection of Mother Goose rhymes, the celebrated original is back in a gorgeous anniversary edition.

To a small child, words are magical. And the most magical of all are the beloved words of Mother Goose. Here, folklorist Iona Opie has gathered more than sixty treasured rhymes in their most perfect, honest forms, from “Hey Diddle, Diddle" and “Pat-a-Cake” to “Little Jack Horner” and “Pussycat, Pussycat” — familiar verses that have been passed from parent to child for generations and are every child’s birthright. With watercolors by Rosemary Wells capturing the simple joy and sly humor of the classic nursery rhymes, this special anniversary volume features a case cover and jacket and includes a note from the illustrator on the unparalleled influence of Mother Goose, both during childhood and far beyond it.

A lovely 20th-anniversary edition of the acclaimed 1996 collaboration between illustrator Rosemary Wells and editor Iona Opie. Here some 60 classic nursery rhymes are set amid ink-and-watercolor pictures as quirky as they are cozy.
—The Wall Street Journal

Iona Opie (1923-2017) dedicated her life to collecting and preserving children’s rhymes as an art form and believed that “nursery rhymes are good for you.” In partnership with her late husband, Peter Opie, she edited many acclaimed books of children’s folklore, including The Oxford Dictionary of Nursery Rhymes.

Rosemary Wells is the author and/or illustrator of more than 120 books for young readers. She has won many awards, including more than twenty American Library Association Notable Book citations, a New York Times Book Review Best Illustrated Book of the Year Award, and a Boston Globe–Horn Book Award. She lives in a small town in New England.
Loading...
or support indie stores by buying on