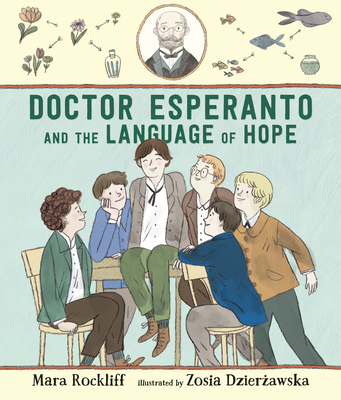 Doctor Esperanto and the Language of Hope

Meet the boy who made up his own language — and brought hope to millions.

Once there was a town of many languages but few kind words. Growing up Jewish in Bialystok, Poland, in the late 1800s, young Leyzer Zamenhof was surrounded by languages: Russian, Yiddish, German, Polish, and many others. But the multiethnic Bialystok was full of mistrust and suspicion, and Leyzer couldn’t help but wonder: If everyone could understand each other, wouldn’t they be able to live in peace? So Zamenhof set out to create a new language, one that would be easy to learn and could connect people around the world. He published a book of his new language and signed it Dr. Esperanto — “one who hopes.” Mara Rockliff uses her unique knack for forgotten history to tell the story of a young man who saw possibility where others saw only barriers, while Polish illustrator Zosia Dzierzawska infuses every scene with warmth and energy, bringing the story of Esperanto to life.

Praise For Doctor Esperanto and the Language of Hope…

This delightful story deserves its charming illustrations, rendered in pen and ink and assembled digitally. They spread more cheer as Leyzer travels to France to attend a universal congress of Esperanto and share his language in person. Appended back matter relates more facts about Zamenhof and Esperanto’s simple structure. This inspiring, overlooked historical figure showed that experimentation isn’t limited to science.
—Booklist

Leyzer Zamenhof hated war and conflict. He lived in late-19th-century Bialystok (then part of the Russian Empire), where a diverse, distrustful population spoke many languages. He believed that a common language could bring everyone together, so he began the task of inventing that language...Unusual and fascinating.
—Kirkus Reviews

Softly colored cartoon illustrations show various, mostly European cultures. The overall feeling is warm and optimistic. This is an inspiring story of determination and hope. Recommended in part because there are no other books about Esperanto or Zamenhof for this grade range. Especially useful for adults interested in the language who want to share their enthusiasm with their students or children in their lives.
—School Library Journal

Mara Rockliff is the author of many books for children, including the picture books Mesmerized, an Orbis Pictus Honor Book; Around America to Win the Vote; Anything But Ordinary Addie; Chik Chak Shabbat; and Me and Momma and Big John, a Charlotte Zolotow Honor Book and Golden Kite Award winner. She lives in Lancaster, Pennsylvania.

Zosia Dzierzawska studied illustration in Milan, Italy. She has published throughout the world, and her work has appeared in the New York Times. Doctor Esperanto and the Language of Hope is her American picture book debut. She lives in Warsaw, Poland.
Loading...
or support indie stores by buying on