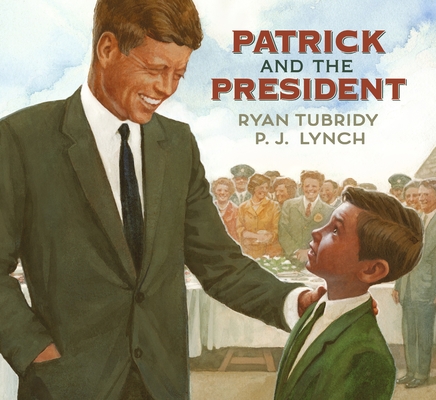 Patrick and the President

Witnessed through the eyes of a young boy, a captivating story beautifully evokes John F. Kennedy’s return to his ancestral home.

When the beloved president visited Ireland in 1963, he described it as the best four days of his life. And for a generation of Irish people, it was a trip they never forgot. This warmly told, bighearted picture book captures the fevered excitement in the buildup to the president’s visit, all seen through the eyes of a young boy named Patrick who wants to know more than anything what it would feel like to shake the president’s hand. Rooted in historical fact and marking the centennial of John F. Kennedy's birth, this feast of a book offers readers a pure and personal take on JFK’s visit to County Wexford, Ireland. Included in the back matter is a time line that helps amplify the story.

Praise For Patrick and the President…

Lynch captures the narrative's fevered tone in splendidly realistic scenes of close-packed crowds and excited pale faces. Kennedy looks suitably tall, grand, and genial, and Patrick is the very picture of freckle-faced concentration as he slices a Swiss roll and offers it to the great man...meeting the president is always going to be a memorable moment, whoever's holding the office.
—Kirkus Reviews

The text is pleasant and quietly touching. The softly hued illustrations, expertly rendered in watercolor, help to enhance the text...A lovely introduction to a former U.S. president from a unique historical perspective. Consider for U.S. history and biography collections.
—School Library Journal

It’s an uplifting imagined episode that reflects the way an encounter with fame can energize an entire community. An afterword delves into the details of Kennedy’s visit, including the itinerary of his trip.
—Publishers Weekly

It's a story and a book that deserves to be read and reread by every Irish and Irish American child for generations to come.
—Irish Voice

Ryan Tubridy is one of Ireland’s leading and best-loved media personalities, gracing both the Irish and U.K. airwaves, and he has won numerous awards and accolades. He is best recognized as the current host of the long-running chat show The Late Late Show, and is also the author of a nonfiction book for adult readers, JFK in Ireland: Four Days That Changed a President. Ryan Tubridy lives in Dublin.

P.J. Lynch has won the Kate Greenaway Medal twice and the Christopher Medal three times. His research brings impeccable detail to the twenty books he has illustrated, including The Christmas Miracle of Jonathan Toomey by Susan Wojciechowski, When Jessie Came Across the Sea by Amy Hest, A Christmas Carol by Charles Dickens, and Mysterious Traveler by Mal Peet and Elspeth Graham, as well as his author-illustrator debut, The Boy Who Fell Off the Mayflower, or John Howland’s Good Fortune. P.J. Lynch lives in Dublin.
Loading...
or
Not Currently Available for Direct Purchase