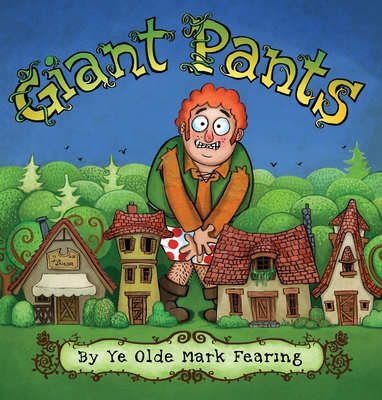 Who hasn’t misplaced something important? Readers large and small will laugh knowingly along with this relatable (and rather giant) case of forgetfulness.

Belbum is a giant. Like most giants, he is very good at stomping, napping, and losing things. One day he loses something especially important, though: his only pair of pants. After searching high and low, Belbum sets off to ask his friends whether they have any pants he can borrow. But the cyclops only wears tunics. The gnome’s pants, stretchy as they may be, are far too small for Belbum. And unicorns don’t even wear pants. There’s only one thing left for Belbum to do: walk to the tailor in town . . . in his underwear! From the author-illustrator of The Great Thanksgiving Escape comes an enchantingly silly tale about forgetting your things — and holding your head up high.

The central joke in Fearing's simple text will tickle toddlers as will the digitally created, bright, cartoon illustrations of the ginger-haired white giant failing miserably to protect his dignity while he acts like a toddler himself. A scenery-chewing performance will be a hit at giant- and underwear-themed storytimes and anywhere fine undies are appreciated.
—Kirkus Reviews

Illustrating in bold and brassy digital cartoons, Fearing (The Great Thanksgiving Escape) gives readers lots to laugh about, including Belbum’s friends’ unhelpful suggestions (“I don’t wear pants. You could try that,” offers Lucy the unicorn), the ways those friends make use of his spare pants (the gnomes turn them into a canopy for a picnic spot), and the contrast between the giant’s crankiness and sheepishness.
—Publishers Weekly

Children (not to mention certain parents) will laugh to see the carrot-topped behemoth lumbering about the countryside on hairy legs, and should also get Fearing’s tongue-in-cheek point.
—Booklist Online

Large trim size and bold colors and line work suit the story line, and the details in the digital art ramp up the humor and character development while creating atmosphere with amusing fairy-tale tropes throughout. A yellowed and tattered map on the endpapers charts the giant’s trek for his trousers.
—The Horn Book

Mark Fearing is the illustrator of Great, Now We've Got Barbarians! by Jason Carter Eaton and the author-illustrator of The Great Thanksgiving Escape, as well as several other books for children. Mark Fearing lives in Oregon.
Loading...
or support indie stores by buying on