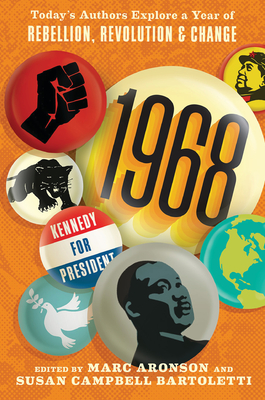 Today's Authors Explore a Year of Rebellion, Revolution, and Change

Welcome to 1968 — a revolution in a book. Essays, memoirs, and more by fourteen award-winning authors offer unique perspectives on one of the world’s most tumultuous years.

Nineteen sixty-eight was a pivotal year that grew more intense with each day. As thousands of Vietnamese and Americans were killed in war, students across four continents took over colleges and city streets. Assassins murdered Dr. King and Robert F. Kennedy. Demonstrators turned out in Prague and Chicago, and in Mexico City, young people and Olympic athletes protested. In those intense months, generations battled and the world wobbled on the edge of some vast change that was exhilarating one day and terrifying the next. To capture that extraordinary year, editors Marc Aronson and Susan Campbell Bartoletti created an anthology that showcases many genres of nonfiction. Some contributors use a broad canvas, others take a close look at a moment, and matched essays examine the same experience from different points of view. As we face our own moments of crisis and division, 1968 reminds us that we’ve clashed before and found a way forward — and that looking back can help map a way ahead.

Marc Aronson is the author and editor of many titles for young people, including War Is: Soldiers, Survivors, and Storytellers Talk about War, co-edited by Patty Campbell, and Master of Deceit: J. Edgar Hoover and America in the Age of Lies. Marc Aronson lives in New Jersey.

Susan Campbell Bartoletti is the author of many nonfiction books for young people, including Hitler Youth: Growing Up in Hitler’s Shadow, a Newbery Honor Book. She lives in Pennsylvania.

Praise For 1968: Today's Authors Explore a Year of Rebellion, Revolution, and Change…

Fourteen authors, including Omar Figueras, Lenore Look, and editors Aronson and Bartoletti, write about the tumultuous events of 1968...The book's strength lies in the way different voices and different angles come together into an integrated whole. Fascinating and accomplished.
—Kirkus Reviews (starred review)

Authors explore the tumultuous global events of 1968 in this anthology...the differences in their backgrounds make for a vivid, dynamic account of the complicated, intersecting politics behind brief accounts in history books. With an approach promoting critical thinking, this collection will likely help illuminate a deeply important year in world history and encourage fresh thinking about our current contentious moment.
—Booklist

The book begins with the essays, but points back to scholarship, or into the world itself, in a delightful way. This wide-ranging anthology is useful as both a print symposium on the topic of 1968 and as a source book for further study.
—School Library Journal

Fourteen essays, interspersed with Elizabeth Partridge’s “Nightly News” commentaries, examine events above and below the fold of a most newsworthy year, 1968...it’s the less frequently told stories that set this volume apart. Susan Bartoletti’s lively, resonant take on the protest theatrics of Abbie Hoffman along with David Lubar’s thoughtful overview of the state of stand-up comedy offer perspective on the place of humor, satire, and the absurd in the media.
—Bulletin of the Center for Children's Books
or support indie stores by buying on
Copyright © 2020 American Booksellers Association