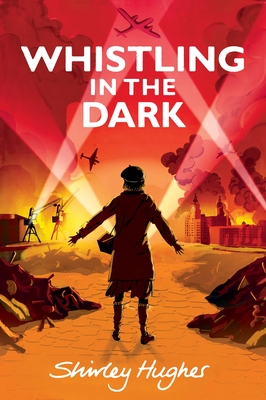 Whistling in the Dark

Legendary author Shirley Hughes draws on her young teenage memories for a compelling novel of friendship and mysteries set in Liverpool during the Blitz.

Liverpool, 1940: Thirteen-year-old Joan's home is under constant threat from the Nazis' terrifying nightly air raids. Everyone is on edge, faced with strict food rationing, curfews, and blackouts. It’s not an easy time to be a teenager. Joan’s one solace is going to the movies with her best friend, the unflappable Doreen, but when the bombings intensify, even that becomes too dangerous. There’s also the matter of a strange man who Joan sees lurking near their home. Who is he, and why does he think Joan can help him? Even more unsettling, as the Blitz worsens, Joan and her friends make a discovery down by the old mill that will tear the whole community apart. In the hardship of war, everything seems to be rationed — except true friendship.

Praise For Whistling in the Dark…

Hughes, who was a 13-year-old in a Liverpool suburb during WWII, transports readers to that time and place through vivid details of commonplace sights and activities...An eventful historical novel with a distinctive setting.
—Booklist Online

World War II has provided the setting for numerous books and this one comes from well-respected British author Shirley Hughes. Having lived in England during the war, Hughes has many memories to draw upon in creating this book.
—School Library Connection

Readers will be thoroughly drawn into the lives of the vivid characters, and will become invested in their downfalls and triumphs.This must-read novel seamlessly blends history and coming-of-age without being didactic or overly nostalgic. Hand it to middle grade fans of World War II–set fiction.
—School Library Journal

Compact and fast-paced, this will satisfy historical fiction fans tempted by Bradley’s The War That Saved My Life (BCCB 3/15) and looking for a quick pick.
—Bulletin of the Center for Children's Books

Shirley Hughes is the author and/or illustrator of more than fifty children’s books, including her first novel, Hero on a Bicycle. She has won the Kate Greenaway Medal twice and was named an Officer of the Most Excellent Order of the British Empire for her distinguished service to children’s literature. She lives in London.
Loading...
or
Not Currently Available for Direct Purchase