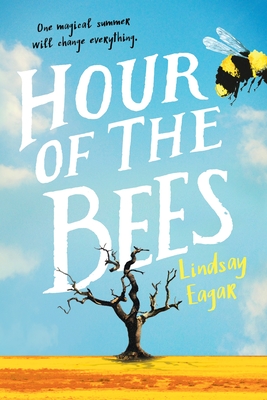 Hour of the Bees

While her friends are spending their summers having pool parties and sleepovers, twelve-year-old Carolina — Carol — is spending hers in the New Mexico desert, helping her parents move her grandfather into a home for people with dementia. At first, Carol avoids prickly Grandpa Serge. But as the summer wears on, Carol finds herself drawn to him, fascinated by the crazy stories he tells her about a healing tree, a green-glass lake, and the bees that will bring back the rain and end a hundred years of drought. As the line between magic and reality starts to blur, Carol must decide for herself what is possible — and what it means to be true to her roots.

Praise For Hour of the Bees…

Eagar seamlessly blends a 12-year-old girl’s summer of change with a hefty dose of magical realism in this accomplished debut...Fairytale motifs (“No rain for a hundred years”) emphasize the stark physicality of the New Mexican mesa, with its oppressive heat, spindly sheep, and numerous dangers. Through this atmospheric setting, Eagar sustains a sense of wonder and longing for small things (bees, seeds, stories) to respond to big human needs.
—Publishers Weekly (starred review)

Tightly plotted and elegantly characterized, this is a striking debut. Both Carol’s journey and Serge’s stories seem inherently true, and the juxtaposition of the two results in a moving, atmospheric novel of family, heritage, and fairy tales that are more real than not.
—Booklist (starred review)

The delicate magic of Serge’s story ties present and past together in a beautifully written, affecting story of forgiveness and understanding that enables Carol to move forward in her own life, resetting her values and claiming her own place in her grandfather’s story. Her sulks, fears, and desires render her credibly twelve, and the storytelling ably prepares readers for her less predictable decisions. Offering a compelling introduction to Latin American magic realism, this will have appeal for middle-school lovers of literary fiction.
—Bulletin of the Center for Children's Books (starred review)

Serge and Carolina's story is a touching reminder to "squeeze the juice out of every day" and remember where (and who) you call home. A poignant intergenerational story about finding and honoring your roots.
—Kirkus Reviews

Hour of the Bees is as grand as the landscape it springs from, an ode to family and heritage but also to living fearlessly. Forget about the middle-grade designation; everyone who reads this will be touched, and quite possibly moved to re—secure their family ties. Dreamlike while also gritty and real, this is a gorgeous work of art.
—BookPage

Lindsay Eagar has said that her novel “Hour of the Bees” first came to her as a title without a story, involving elements—bees approaching a man named Serge—whose meanings she did not know. Only after she had finished writing did it all make sense to her, which is a nice echo of what the reader will experience in this mystical, memorable riddle of a book.
—The Wall Street Journal

This is a deeply moving story on so many levels. The family dynamics are so real that readers will be drawn to the emotions and actions of each of the characters...The author does an excellent job of offering character struggles that most readers can relate to—Carolina with her sister Alta, and Carolina’s dad with Grandpa Serge. Bordering on magical realism, this book will leave its readers spellbound and is destined to be a favorite enjoyed by readers of all ages.
—School Library Connection