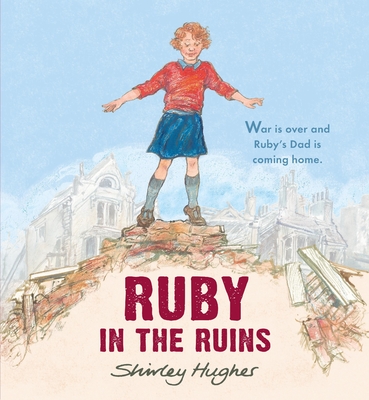 Ruby in the Ruins

From beloved British storyteller Shirley Hughes comes a touching tale of unconditional love as a family puts itself back together in postwar London.

Ruby and Mum cling to each other while they live through the terrifying London Blitz, waiting for Dad to come home from the war. Day after day they hope for his return — but when the moment to meet him at the station finally comes, Ruby hardly recognizes the tall man who steps off the train. He’s big and sunburned, and he doesn't seem to be as engaged as he once was. It’s easier to play outside in the wreckage of the bombings than to stay at home with a dad she doesn’t know anymore. But when Ruby hurts her knee in the ruins, there’s only one person who can rescue her and make her feel all right.

Praise For Ruby in the Ruins…

The clothes and environmental details in the illustrations perfectly complement the text, as do the loose character drawings in the artist's signature style, with the judicious addition of bright colors that pop against the postwar gray and sepia. Endpapers with apparently authentic wartime ads are a nice finishing touch. A sweet celebration of familial love.
—Kirkus Reviews

With a classic, retro-look to it, this historical picture book is geared toward younger elementary schoolers...The ink, gouache, and watercolor illustrations have a diffused Rockwell-esque charm.
—School Library Journal

Hughes, whose chapter book Whistling in the Dark (2017) told of an older girl’s experiences in England during WWII, now offers a satisfying, realistic story for younger children. On the large double-page spreads, gouache paintings portray the characters with compassion...Unusual mainly in its setting, this picture book views postwar London from a child’s point of view.
—Booklist

Shirley Hughes has published more than two hundred books and won many prestigious awards, including the Kate Greenaway Medal twice. Her books include Daisy Saves the Day, Out and About: A First Book of Poems, the novels Hero on a Bicycle and Whistling in the Dark, and the Digby O’Day series, illustrated by her daughter, Clara Vulliamy. Shirley Hughes lives in West London.
Loading...
or
Not Currently Available for Direct Purchase