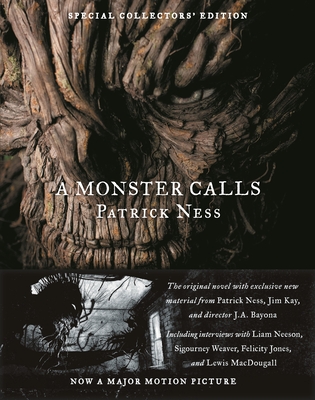 A deluxe hardcover edition of Patrick Ness’s masterpiece features the entire illustrated novel as well as more than one hundred pages of extraordinary film-inspired content.

To celebrate the release of Patrick Ness’s acclaimed novel as a feature film, directed by Juan Antonio Bayona, this gorgeous special edition of A Monster Calls includes Jim Kay’s original illustrations as well as a comprehensive bonus section featuring:
* enlightening new essays by the author (who also wrote the screenplay)
* interviews with the director, cast, and crew
* stills from the movie
* exclusive behind-the-scenes content
* previously unpublished early sketches by the illustrator, whose artwork inspires animated scenes in the film.

Patrick Ness is the author of A Monster Calls and More Than This, both of which were awarded the Carnegie Medal, as well as the critically acclaimed and best-selling Chaos Walking trilogy. Among the numerous awards he has received are the Guardian Children’s Fiction Prize, the Booktrust Teenage Prize, and the Costa Children’s Book Award. Born in Virginia, he lives in London.

Siobhan Dowd spent twenty years as a human rights campaigner before her first novel, A Swift Pure Cry, was published in 2006. She won the Carnegie Medal posthumously in 2009 after her death from breast cancer, in 2007.

Jim Kay is the illustrator of Patrick Ness’s A Monster Calls as well as The Great War: Stories Inspired by Items from the First World War, an anthology of short stories. Jim Kay studied illustration and worked in the archives of the Tate Gallery and the Royal Botanic Gardens at Kew, two experiences that have influenced his work. He lives in Edinburgh, Scotland.
Loading...
or
Not Currently Available for Direct Purchase