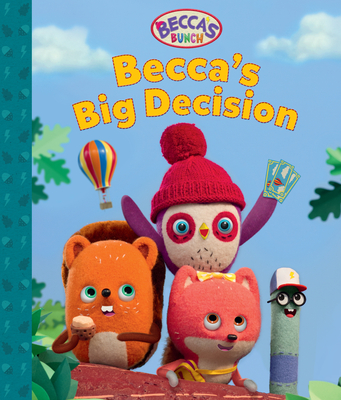 Becca has a tough decision to make in this debut picture book based on Becca’s Bunch, the acclaimed stop-motion animated series on Nick Jr.

There’s a special delivery in the mail for Becca today: tickets to see the Firefly Flyby in Uncle Ned’s hot-air balloon! It’s the perfect adventure for the Bunch, as Becca and her friends Pedro, Sylvia, and Russell like to call themselves. But excitement turns to worry when Becca realizes she has only three tickets but that there are four of them all together. Oh, feathers! How will Becca choose which of her friends to take on the Firefly Flyby?

JAM Media is the creator and producer of the animated series Becca’s Bunch, as seen on Nick Jr. In each episode, Becca and her friends Sylvia, Pedro, and Russell explore together in Wagtail Woods, where there’s always fun to be had, and a problem to solve. Every adventure with the Bunch proves that with compassion, empathy, and positive thinking, anything is possible!
Loading...
or support indie stores by buying on