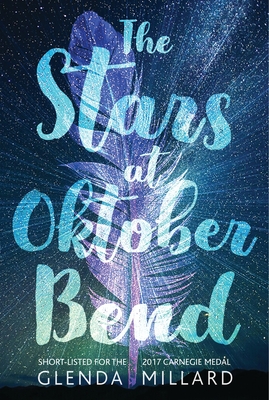 The Stars at Oktober Bend (Hardcover)

Beautiful, lyrical prose, told in two voices, lifts up a poignant story of two traumatized teens who find each other in a small riverside town.

i am the girl manny loves. the girl who writes our story in the book of flying. i am alice.

Alice is fifteen, with hair as red as fire and skin as pale as bone. Something inside Alice is broken: she remembers words, but struggles to speak them. Still, Alice knows that words are for sharing, so she pins them to posters in tucked-away places: railway waiting rooms, fish-and-chips shops, quiet corners. Manny is sixteen, with a scar from shoulder to elbow. Something inside Manny is broken, too: he once was a child soldier, forced to do terrible, violent things. But in a new land with people who care for him, Manny explores the small town on foot. And in his pocket, he carries a poem he scooped up, a poem whose words he knows by heart. The relationship between Alice and Manny will be the beginning of love and healing. And for these two young souls, perhaps, that will be good enough.

Praise For The Stars at Oktober Bend…

Though teens may be hesitant at first, they will be rewarded with a compelling, moving portrait of characters who have been through tragedy and can see through to the other side. A heartwarming story that is a worthy addition to high school libraries.
—School Library Journal (starred review)

Alice’s first- person narration is bereft of capital letters, which adds a sense of fragility and nicely contrasts with Manny’s third-person perspective...this is an original and gritty love story that will appeal to fans of Ellen Hopkins.
—Booklist

Alice and Manny are two incredible souls, and their story is filled with pain and beauty. THE STARS AT OKTOBER BEND is told in both of their voices, though Alice's words are the ones that made me linger on each page...I wanted to rush through to the end to see the outcome, but I wanted to pause after every one of Alice's descriptions and drink in her words. Glenda Millard has written an unforgettable story of two teens dealing with pain that no one should have to endure. THE STARS AT OKTOBER BEND is more than a book; it's a gift to the reader, and I highly recommend it.
—YA Books Central (blog)