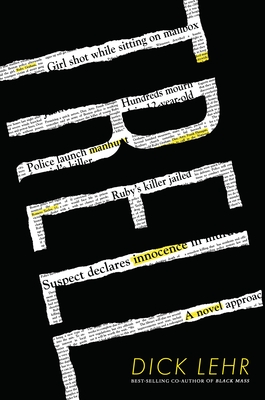 From the co-author of Black Mass comes a gripping YA novel inspired by the true story of a young man's false imprisonment for murder — and those who fought to free him.

On a hot summer night in the late 1980s, in the Boston neighborhood of Roxbury, a twelve-year-old African-American girl was sitting on a mailbox talking with her friends when she became the innocent victim of gang-related gunfire. Amid public outcry, an immediate manhunt was on to catch the murderer, and a young African-American man was quickly apprehended, charged, and — wrongly — convicted of the crime. Dick Lehr, a former reporter for the Boston Globe’s famous Spotlight Team who investigated this case for the newspaper, now turns the story into Trell, a page-turning novel about the daughter of an imprisoned man who persuades a reporter and a lawyer to help her prove her father’s innocence. What pieces of evidence might have been overlooked? Can they manage to get to the truth before a dangerous character from the neighborhood gets to them?

Lehr covered the inspiring true story behind this one as a journalist and brings to light many of the important details not only of the case, but of the public conversation that surrounded Boston at the time—and does to this day...This tale of the fallout from the war on drugs recognizes one family's resolve as it hammers home the failures of public policy and the court system to uphold justice for all.
—Kirkus Reviews

Based on events involving the accidental shooting death of an African American girl, the crack-fueled gang culture of 1980s Boston, and the ensuing outrage, this book will resonate with today’s teens. Trell is an appealingly gutsy heroine whose belief in her father is strong enough to drag an attorney and a down-on-his-luck journalist into her orbit...Younger YA readers will enjoy this fast-paced thriller.
—School Library Journal

Lehr's background as a journalist results in a story full of details that might not otherwise be captured...The young heroine's voice and determination to prove the truth are inspiring in this intriguing take on a 1980s crime.
—ForeWord Reviews

Lehr, himself an investigative reporter for the Boston Globe, found the inspiration for this novel in the true story of a wrongful conviction, and his meticulously drawn procedural elements are unsensationalized and convincing. Recommend this to readers not quite ready to tackle season one of the Serial podcast.
—Bulletin of the Center for Children's Books

The story was inspired by real-life events that happened in Boston in the 1980s. The author himself is a former Boston Globe reporter which lends authenticity to the story...the story itself is compelling and fast-paced.
—School Library Connection

Dick Lehr is the co-author, with Gerard O'Neill, of Black Mass, a New York Times bestseller about Boston crime boss Whitey Bulger, which was made into a film starring Johnny Depp. His most recent book is The Birth of a Movement, which Booklist deemed in a starred review "a remarkable look at the power of mass media and the nascent civil rights movement at a pivotal time in American history." The book was adapted into a PBS documentary that aired on the network's primetime show, Independent Lens, in February 2017. Dick Lehr is a former reporter for the Boston Globe and now teaches journalism at Boston University. He lives near Boston.
Loading...
or support indie stores by buying on