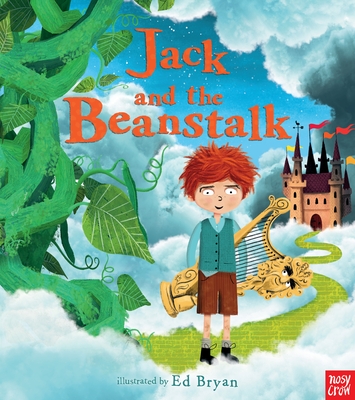 Jack and the Beanstalk

Based on the award-winning apps, this series of Nosy Crow Fairy Tales is the perfect introduction for preschoolers to these classic stories. With simple child-friendly text and bright, modern artwork with lots of fun details, these make perfect read-alouds.

When Jack and his mother fall on hard times, they decide to sell their only cow. But Jack’s mother is not impressed when her son comes home with a handful of magic beans. The beans go straight out of the window . . . where they grow into an enormous beanstalk! At the top of the beanstalk, Jack finds a giant castle in the clouds. Inside, there are lots of people who need his help, lots of stolen treasures, and a very angry giant. Where will Jack’s adventures lead him?

Ed Bryan has followed an artistic path ever since his art teacher told his parents that their son blossomed in the art room. He studied industrial design and worked as a 3-D artist, animator, and illustrator on video games such as Viva Piñata. He likes nothing better than making up stuff and coloring it in. Ed Bryan grew up in Suffolk, England, in a house full of home computers and pencils, and he now lives in Leicestershire.
Loading...
or support indie stores by buying on