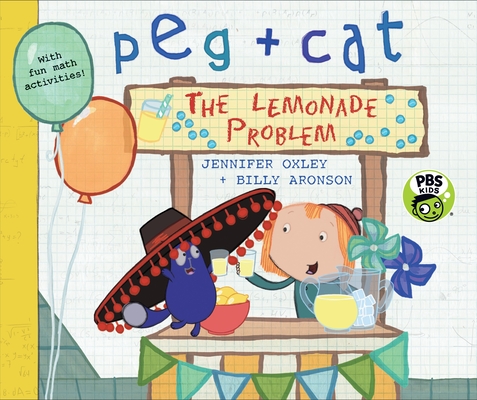 When life gives them a problem to solve, Peg and Cat make lemonade — and get a lesson in bartering — in a refreshing math adventure.

It’s a hot day, so what could be cooler than setting up a lemonade stand? When Peg needs some marbles to keep her special marble company, she and Cat decide to sell lemonade in exchange for ten marbles a cup. But the Teens have other ideas. “But just one cup for ten marbles?” says Mora. “I’m not made of marbles!” So Peg and Cat keep changing their sign until they hit a price — two marbles! — that has customers lining up. There’s just one problem: Peg and Cat forgot the cups! Can they barter their way back into business — or will they end up totally freaking out?

Peg + Cat is the Emmy Award–winning animated TV series created by Jennifer Oxley and Billy Aronson and produced by The Fred Rogers Company. It was named best new preschool series at the 2015 Kidscreen Awards.

Young readers will delight in the familiar characters and new adventure, all while learning about bar graphs, supply and demand, and bartering...This book is a fun and educational read.
—School Library Connection
or
Buy Here
Copyright © 2020 American Booksellers Association