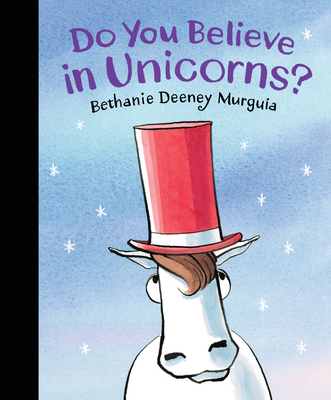 Do You Believe in Unicorns?

Is believing in magic the key to seeing a unicorn? If you keep your eyes open to wonder, the possibilities are endless.

Is that a horse wearing a hat? It’s definitely not a unicorn in disguise — that would be ridiculous, right? It’s probably just a horse that’s having a bad hair day. Or trying to keep the sun out of its eyes. Or perhaps this horse just really likes hats! If you follow it long enough, maybe it will take off its hat and you’ll finally know for sure. Or will you? It’s all a matter of perspective in this cheerful, cheeky story about seeing magic in the everyday.

Praise For Do You Believe in Unicorns?…

As coy as Jon Klassen, Murguia is a master of subtlety...Murguia's muted pen-and-ink-and-watercolor illustrations, presented almost entirely on double-page spreads, create a lush cartoon world. Careful readers might notice a final hint in the form of a lizard that just might be a dragon—a brilliant punctuation mark to this open-ended story. Spellbinding read-aloud gold.
—Kirkus Reviews (starred review)

The narrator’s tongue-in-cheek obliviousness slides easily into an affirmation of the power of imagination...The musing text, with its questions posed to the audience, will be a hit at storytime or during a lapsit, and the invitation to believe the impossible makes this a wonderful segue into encouraging kids to make up their own fantasy stories.
—Bulletin of the Center for Children's Books (starred review)

This charmer of a picture book makes a strong case for the existence of unicorns by juxtaposing a skeptical narrator with the action of the story itself...A fun take on belief and magic.
—Booklist Online

Bethanie Deeney Murguia is the author-illustrator of several picture books, including I Feel Five!, The Best Parts of Christmas, and The Too-Scary Story.
Loading...
or
Not Currently Available for Direct Purchase