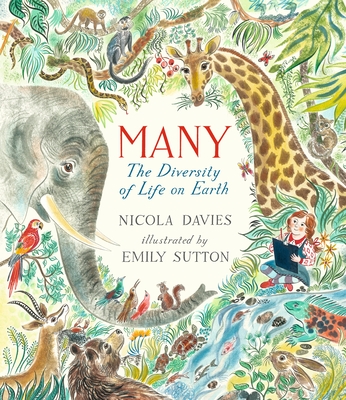 The Diversity of Life on Earth

After magnifying the beauty of unseen organisms in Tiny Creatures, Nicola Davies and Emily Sutton turn their talents to the vast variety of life on Earth.

The more we study the world around us, the more living things we discover every day. The planet is full of millions of species of plants, birds, animals, and microbes, and every single one — including us — is part of a big, beautiful, complicated pattern. When humans interfere with parts of the pattern, by polluting the air and oceans, taking too much from the sea, and cutting down too many forests, animals and plants begin to disappear. What sort of world would it be if it went from having many types of living things to having just one? In a beautiful follow-up, the creators of the award-winning Tiny Creatures: The World of Microbes deliver an inspiring look at the extraordinary diversity of Earth’s inhabitants — and the importance of their preservation.

Emily Sutton is an artist with a degree in illustration from Edinburgh College. In addition to making prints, ceramics, and textiles, she is the illustrator of The Christmas Eve Tree by Delia Huddy and Tiny Creatures by Nicola Davies. Emily Sutton lives in York, England.

Praise For Many: The Diversity of Life on Earth…

Davies has a keen sense of how to represent science for beginners. Sentences as sensible and jargon-free as “Sometimes, things that look different are really the same…and things that look the same are really different” contain deep mathematical and biological concepts that include ecosystems and interdependence, relative quantities, biomes, food webs, and the classification of living things.
—The Horn Book (starred review)

Writer and zoologist Davies celebrates the "big, beautiful, complicated pattern" that is life on Earth...A pair of spreads show first a lushly populated rain forest and then the same area with some trees cut down and animals leaving; the third in the sequence shows a museum exhibit of extinct species. We can't survive as one. A sobering message presented gloriously.
—Kirkus Reviews

With a streamlined narrative and intricate, folk-art images evoking Mary Blair–illustrated Golden Books, Davies and Sutton, the team behind Tiny Creatures: The World of Microbes, sound an alarm about species extinction...this early entrée into environmental interconnectedness and stewardship should launch plenty of discussion.
—Publishers Weekly

Jam-packed watercolor illustrations fill most pages of this picture book that details the diversity of plants and animals around the earth...This book would supplement curriculum about the environment, and could be used as an activity book for preschoolers.
—School Library Connection Online

Many: The Diversity of Life on Earth is especially appropriate for young children and offers numerous possibilities for learning about colorful plants and animals...it is sure to be enjoyed by nature lovers of all ages.
—BookPage

A call to all young children to notice the rich diversity of life, its interconnectedness, and humanity’s role in its devolution...Gravity, hope, and joy are all intertwined in Davies’s and Sutton’s presentation. The quality of the watercolors and text make this an appealing choice for large libraries that serve young children.
—School Library Journal

Living things form a pattern that is ‘big, beautiful, complicated,’ writes Nicola Davies in ‘Many: The Diversity of Life on Earth’ (Candlewick, 40 pages, $15.99), a picture-book appreciation of the natural world for children ages 3-6.
—The Wall Street Journal
or
Buy Here
Copyright © 2020 American Booksellers Association