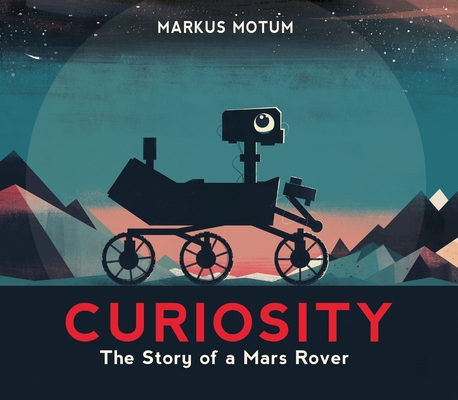 The Story of a Mars Rover

Maybe you remember when a little robotic spacecraft landed on a far-off planet. On August 6, 2012, the rover Curiosity touched down on the rocky surface of Mars — and now she’s ready to guide you through her journey firsthand. From idea to creation and beyond, this fact-filled, stylish book introduces readers to Curiosity and her mission: to discover more about the red planet and search for evidence of life. How did Curiosity get her name? What tools does she use to carry out her tasks? In her own voice, the popular NASA rover tells how and why she traveled more than 350,000,000 miles to explore a planet no human has ever visited . . . and what she’s been doing there. In his debut picture book, Markus Motum brings Curiosity’s story to life in vivid color: the deep blues of space set off the warm, rusted hues of Mars’s dusty red surface, marking this lovable rover and her mission as something special — truly a world apart.

Praise For Curiosity: The Story of a Mars Rover…

The Mars rover Curiosity narrates her own story in Motum’s handsome and engaging children’s book debut...The book’s large trim size and expansive scenes work in tandem to evoke the vastness of star-filled skies and reddish Martian landscapes. Originally published in the U.K., this accessible look at interplanetary exploration will appeal to a broad range of young space enthusiasts.
—Publishers Weekly (starred review)

Fans of the eponymous robot star of the film WALL-E will see a kindred spirit in this chronicle's narrator...Curiosity concludes with the thought that its wheel tracks may one day be joined by footprints. Here's hoping. The personification adds an appealing angle to this venturesome visit to Earth's closest planetary neighbor.
—Kirkus Reviews

Motum’s retro mixed-media artwork, in muted tones and stylish yet recognizable shapes, is a fantastic vehicle for this informative, inviting glimpse into an exciting STEM topic.
—Booklist

Engaging in the thoughtful question, “Is there anybody else out there?”, Curiosity, the rover, goes on a 350,000,000 mile journey into the universe to find some answers. This charming personified robot tells her unique story to an audience that is sure to be captivated.
—New York Journal of Books

Oversized format, with dramatic black backgrounds and futuristic geometric renderings, make this a good choice for classroom sharing, and text that allows an adult reader to charge ahead with the main information—or to linger over technical details—adds to its flexibility.
—Bulletin of the Center for Children's Books

Markus Motum studied illustration at the University for the Creative Arts in England, where he rediscovered his love of picture books. Curiosity is his first book for children. Markus Motum lives in Brighton, England.
Loading...
or support indie stores by buying on