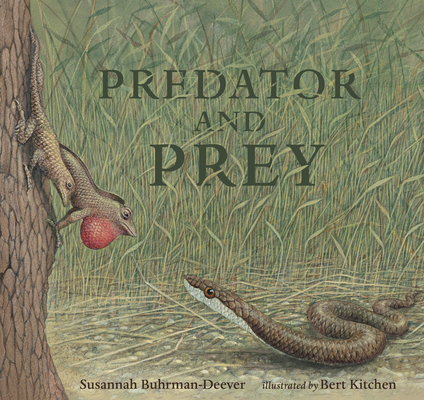 A Conversation in Verse

Who is the predator, and who is the prey? Illuminating poetry and vivid artwork capture the awe-inspiring ways that creatures use their resources to stay alive.

Who wins, the assassin bug or the spider? The bat or the frog? The ant or the honey bee? The male firefly . . . or the female? The battle for survival between predator and prey is sometimes a fight, sometimes a dance, and often involves spying, lying, or even telling the truth to get ahead. Biologist and debut author Susannah Buhrman-Deever explores these clashes in poems and prose explanations that offer both sides of the story. With beautiful, realistic illustrations that are charged with drama, Bert Kitchen captures the breathtaking moments when predator meets prey. Readers who hunger for more about the art of survival will find an extensive list of references in the back.

Praise For Predator and Prey: A Conversation in Verse…

Predator and prey face off in a battle of poems...Text boxes supplement the poems and illustrations with information about the animals, and clever gatefolds in some spreads allow Kitchen's sumptuous illustrations full command by tucking the text inside the folds. An effective presentation of science through poetry, art, and stellar bookmaking.
—Kirkus Reviews (starred review)

Kitchen’s realistic watercolor and gouache illustrations, occasionally presented on gatefold spreads, match the verses’ directness, adroitly showing these creatures and their environments by rendering fine details such as tangled ribbons of grass, geometrically patterned scales, and the brushy texture of a squirrel’s tail.
—Publishers Weekly

Content and cadence are cleverly aligned with the actual behaviors of the animals, and the structure and layouts of the poems also echo traits of the creatures: the words in the blue jay poem are spaced apart, and readers must move their heads back and forth to read them, mimicking the jay’s head movements as it ponders its choice of meal. Illustrations are in soft-focus, with stippled green and brown landscapes, though some of the animals are hard to spot within these environs.
—The Horn Book

Two voices are needed for many of the poems in ‘Predator and Prey’ (Candlewick, 24 pages, $18.99), a picture book for children ages 6-9 written by biologist Susannah Buhrman-Deever, with muted watercolor and gouache paintings by Bert Kitchen. Each page spread captures a fraught moment of confrontation between relatively unsung opponents. So we don’t see that well-known fellow, the lion, stalking a smaller mammal in the veldt; rather, here are face-offs between creatures such as the Sharp-Shinned Hawk and the Chickadee, and the Pacific Rattlesnake and the Ground Squirrel.
—The Wall Street Journal

Susannah Buhrman-Deever is a biologist with a PhD in animal behavior from Cornell University. In addition to her academic work and writing, she has developed inquiry-based ecology curricula for children. Predator and Prey is her first book for children. She lives with her family in upstate New York.

Bert Kitchen has illustrated more than seventeen books for children. He has worked as an animator, textile designer, fine artist, and commercial artist. He lives and works in London.
Loading...
or support indie stores by buying on