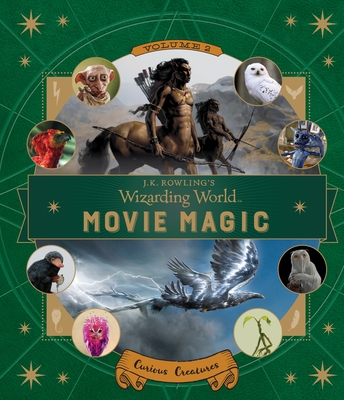 Thunderbirds and Nifflers, house-elves and Hippogriffs—J.K. Rowling’s Wizarding World abounds with magical creatures of all kinds. But how does a Bowtruckle come to life on the big screen? Is an Occamy a snake or a bird? And what’s the truth about Mooncalf poop?

Featuring detailed creature profiles, stunning artwork, and captivating insights from the making of Fantastic Beasts and Where to Find Them and all eight Harry Potter films, these pages reveal everything fans want to know about how these creatures were created. Jam-packed with bonus material—pop-ups, lift-the-flaps, removable posters, and other goodies—this book offers young readers a thrilling backstage pass to the wizarding world.

Ramin Zahed is a journalist who has covered the film and television industries for over twenty years. His writing has appeared in Variety, the Hollywood Reporter, the Los Angeles Times, and Movieline. He is also the author of The Art of Puss in Boots, The Art of Rise of the Guardians, and The Art of DreamWorks. Ramin Zahed lives in Los Angeles, CA.
Loading...
or
Not Currently Available for Direct Purchase