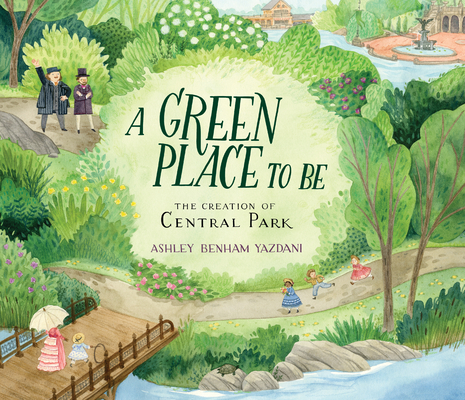 A Green Place to Be

The Creation of Central Park

How did Central Park become a vibrant gem in the heart of New York City? Follow the visionaries behind the plan as it springs to green life.

In 1858, New York City was growing so fast that new roads and tall buildings threatened to swallow up the remaining open space. The people needed a green place to be — a park with ponds to row on and paths for wandering through trees and over bridges. When a citywide contest solicited plans for creating a park out of barren swampland, Calvert Vaux and Frederick Law Olmsted put their heads together to create the winning design, and the hard work of making their plans a reality began. By winter, the lake opened for skating. By the next summer, the waterside woodland known as the Ramble opened for all to enjoy. Meanwhile, sculptors, stone masons, and master gardeners joined in to construct thirty-four unique bridges, along with fountains, pagodas, and band shells, making New York's Central Park a green gift to everyone. Included in the end matter are bios of Vaux and Olmsted, a bibliography, and engaging factual snippets.

Praise For A Green Place to Be: The Creation of Central Park…

This delightful slice of history shows the hard work and careful planning that went into one of the world’s great outdoor public spaces, New York City’s ‘vibrant jewel.’ Yazdani’s mesmerizing watercolor and pencil art teems with fascinating details as it makes the park’s past and present seem unified, driving home the importance of creating and preserving ‘quiet green spots in a fast-changing world.’
—The New York Times Book Review

New Yorkers are still enjoying their very special place to walk, play ball, sail model boats, attend concerts, and so much more. In 1858, two visionary men entered a contest to design and build what remains today as a "vibrant jewel at the heart of New York City." That is, of course, Central Park, and it was the visionary work and attention to detail by Calvert Vaux and Frederick Law Olmsted that created what is still an oasis of green...For park lovers everywhere.
—Kirkus Reviews

This enjoyable and accessible story of the creation of the world’s most famous park opens with a wonderful scene: a modern, sunny day, done in pencil and watercolor (with some digital help), showing Central Park populated by charming and diverse cartoon-style people...Strong backmatter, in which Yazdani highlights the park’s social and environmental roles, anchors this visually appealing, well-written, and all-around successful informational picture book, which celebrates that parks all across America “were made for you.”
—Booklist

Yazdani’s watercolors and text revel in both technical and aesthetic aspects of the creation of Central Park (the name “Greensward” was thankfully abandoned), with attention directed to details such as pavilions and footbridges as well as seasonal activities, and back matter adds biographical information on the designers, factoids concerning references within the illustrations, and a bibliography. New York’s young natives and visitors will enjoy spotting their favorite haunts, and all viewers will be prompted to consider the infrastructure, embellishments, and amenities of their own local parks and playlots.
—Bulletin of the Center for Children's Books

Finally, for a charming picture-book history of the park, great for both children and adult readers, see Ashley Benham Yazdani’s ‘A Green Place to Be’ (Candlewick, 40 Pages, $17.99). Ms. Yazdani’s pencil-and-watercolor illustrations and playful text remind us that Vaux and Olmstead ‘had each been many things’ by 1872, the year they completed their work in Central Park, but forever after were a team of ‘park makers.’ And who were their many and beautiful parks made for? ‘They were made for you.’
—The Wall Street Journal

A marvelous true story of the vision of two men that came to superb fruition in transforming a swampland into one of the nation’s greatest public parks, this choice is highly recommended.
—Kendal A. Rautzhan's "Books to Borrow...Books to Buy"

Ashley Benham Yazdani holds an MFA from the Illustration Practice Program at the Maryland Institute College of Art and a BFA in illustration from California College of the Arts. A Green Place to Be is her debut picture book.
Loading...
or support indie stores by buying on