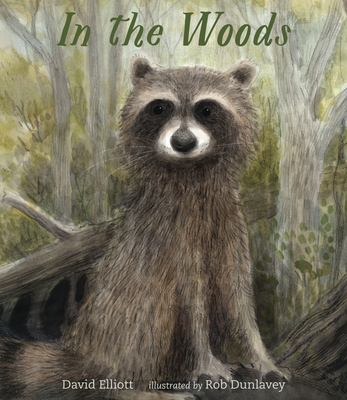 A New York Times best-selling author shares his love for woodland animals in a revealing, beautifully illustrated collection of verse for poetry lovers and budding naturalists.

The animals in the dark woods are secretive, their inner lives a mystery. The stealthy bobcat, the inquisitive raccoon, and the dignified bear waking up from his winter nap are just a few of the glorious animals featured in this clever collection of poems and woodland scenes. This companion to In the Sea, In the Wild, and On the Farm is the first collaboration between David Elliott and Rob Dunlavey, whose colorful, expressive art pairs with the author’s charming poems to create a love letter to the animals of the forest.

Praise For In the Woods…

The compositions are focused and compelling—the viewer knows exactly where to look on every spread. It’s worth lingering to find details of interest...An ideal marriage of poetry and art; another successful entry in a long-running and (seemingly) perennially renewable series.
—The Horn Book (starred review)

Dunlavey's expressively atmospheric double-page paintings play with light effects, a scarlet tanager flashing through the dappled green and a porcupine that's just shuffled out of the beams of an oncoming truck. In addition to the pithy lyric portraits, Elliott provides intriguing facts about each animal in the backmatter, such as the "beaver's teeth are constantly growing," allowing inquisitive listeners to connect with these creatures in a variety of ways. An irresistible invitation to get out of the house and into the woods.
—Kirkus Reviews (starred review)

Dunlavey's watercolors capture the lush hues of the seasons—there's often a touch of red—and invite repeat viewings. He mimics the energy of the text in his portraits of the title animals, blending other inhabitants of the forest into the background. A double-page spread of back matter provides additional facts. There's a lot going on in these woods, and author and illustrator together manage to honor them in a truly spectacular way.
—Booklist (starred review)

This collection of short poetry will be well received by young children. The illustrations are beautiful and perfectly complement the verse describing each woodland creature.
—School Library Connection

This book gently introduces some scientific vocabulary and is a good starting point for discussions about learning new words...Highly recommended for elementary libraries and elementary science and language arts classrooms.
—School Library Journal

David Elliott is the author of many books for young readers, including On the Farm, In the Wild, In the Sea, and In the Past. He is also the author of Baabwaa and Wooliam, illustrated by Melissa Sweet. David Elliott lives in New Hampshire.

Rob Dunlavey is the illustrator of several picture books, including The Dandelion’s Tale and Owl Sees Owl. He has been illustrating for twenty years and has had his work featured in the New York Times, the Boston Globe, and other publications. Rob Dunlavey lives in Boston, Massachusetts.
Loading...
or support indie stores by buying on