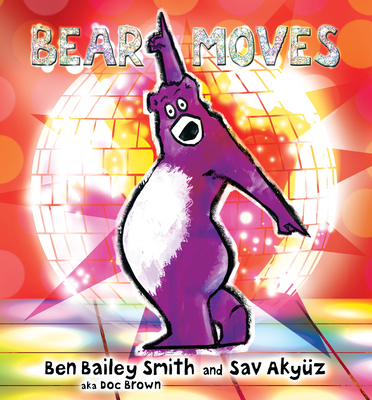 In a high-energy sequel to I Am Bear, the dance-loving star rolls out a variety of dance moves and inspires kids to try some of their own.

Bear’s in a dancing mood, and his friend Bunny is happy to help out with the boom box. With moves like Furry Breaking, Running Bear (you run but don’t go anywhere), and the classic back spin, who could blame observers who might want to bust a move of their own? Actor/rapper Ben Bailey Smith (aka Doc Brown) and artist Sav Akyuz team up again for a lively two-step with the multitalented Bear.

Akyüz's graffiti-esque illustrations again feature strong, black lines, bold colors, and much frenetic action. It ends with Bear succumbing to zzzzzz's on the dance floor, which many readers are sure to do if they expect to keep up with this action-packed picture book. The dance moves make this a fun read that is sure to get you in the groove, if only for a little while. Check it out.
—Kirkus Reviews

Breaking in and out of a percussive rhythm, a big purple bear struts his stuff, showing off hip-hop moves and self-invented glides like “Running Bear” and “Robot.”...there’s enough infectious energy to get young audiences clapping along.
—Booklist Online

Ben Bailey Smith is the author of I Am Bear, his first children’s book. He is a U.K.-based rapper (known as Doc Brown), an actor on the British edition of Law & Order and the British kids’ show 4 O’Clock Club, and a stand-up comedian. He lives in London.

Sav Akyuz made his debut as children’s book illustrator with I Am Bear. He has worked as a storyboard artist on TV programs and feature films. He lives in London.
Loading...
or support indie stores by buying on
(This book is on backorder)