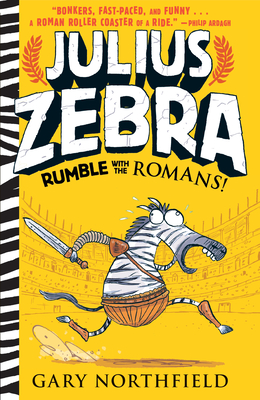 Rumble with the Romans!

“Readers will applaud the Monty Python-esque exploits of this hoofed hero.” — Kirkus Reviews

Captured by Romans, Julius Zebra — along with Milus the scarred lion and Cornelius the clueless warthog — is transported from a smelly water hole on the African savanna to the ferocious clamor of the Colosseum, where the motley menagerie of friends must gear up to be . . . gladiators! Do they have what it takes to succeed in a world where only the meanest and toughest survive? Follow the madcap adventures of Julius and his pals through funny, irreverent text and zany cartoon-style illustrations, with an illustrated guide to Roman numerals and a handy glossary at the end.

Praise For Julius Zebra: Rumble with the Romans!…

Readers will applaud the Monty Python-esque exploits of this hoofed hero.
—Kirkus Reviews

If Greg Heffley were a zebra, this might be his diary, complete with scratchy cartoon illustrations of the goings-on as Julius and his friends attempt to outwit death.
—Publishers Weekly

This zany premise is rife with gags, slapstick comedy, and cartoonish illustrations, wherein the scribbly, bug-eyed animals fight for their lives. Tucked within the nonsense are some nuggets of Roman history and a surprisingly informative glossary. A sequel is assured for those eager for more of Julius’ antics.
—Booklist