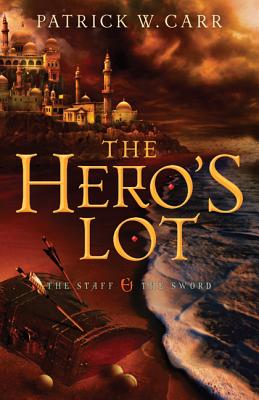 Hero's Lot (Staff and the Sword)

When Sarin Valon, the corrupt secondus of the conclave, flees Erinon and the kingdom, Errol Stone believes his troubles have at last ended. But other forces bent on the destruction of the kingdom remain and conspire to accuse Errol and his friends of a conspiracy to usurp the throne.

In a bid to keep the three of them from the axe, Archbenefice Canon sends Martin and Luis to Errol's home village, Callowford, to discover what makes him so important to the kingdom. But Errol is also accused of consorting with spirits. Convicted, his punishment is a journey to the enemy kingdom of Merakh, where he must find Sarin Valon, and kill him. To enforce their sentence, Errol is placed under a compulsion, and he is driven to accomplish his task or die resisting.

Patrick W. Carr is the author of the acclaimed fantasy A Cast of Stones. He teaches high school and makes his home in Nashville, Tennessee, with his incredible wife, Mary, and their four sons, Patrick, Connor, Daniel, and Ethan. Learn more at www.patrickwcarr.com.
Loading...
or support indie stores by buying on