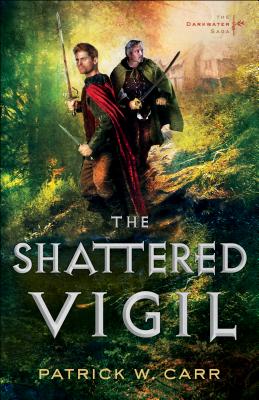 Victory over the dark forces during the feast of Bas-solas should have guaranteed safety for the continent. Instead, Willet and the rest of the Vigil discover they've been outsmarted by those seeking to unleash the evil that inhabits the Darkwater. Jorgen, the member of the Vigil assigned to Frayel, has gone missing, and new attacks have struck at the six kingdoms' ability to defend themselves.

Just when the Vigil thought they had quenched the menace from their enemy in Collum, a new threat emerges: assassins hunting the Vigil, men and women who cannot be seen until it's too late. The orders of the church and the rulers of the kingdoms, fearing the loss of the Vigil's members altogether, have decided to take them into protective custody to safeguard their gift. On Pellin's orders, the Vigil scatters, leaving Willet to be taken prisoner by the church in Bunard.

In the midst of this, Willet learns of the murder of an obscure nobleman's daughter by one of the unseen assassins. Now he must escape his imprisonment and brave the wrath of the church to find the killer in order to turn back this latest threat to the northern continent.

Patrick W. Carr is author of the acclaimed and award-winning The Staff and the Sword series, as well as The Darkwater Saga. After graduating from Georgia Tech, Carr worked at a nuclear plant, did design work for the Air Force, worked for a printing company, and as an engineering consultant. Patrick's day gig for the last five years has been teaching high school math in Nashville, Tennessee. Patrick is a member of ACFW and MTCW and makes his home in Nashville with his incredible wife and their four awesome sons.
Loading...
or support indie stores by buying on