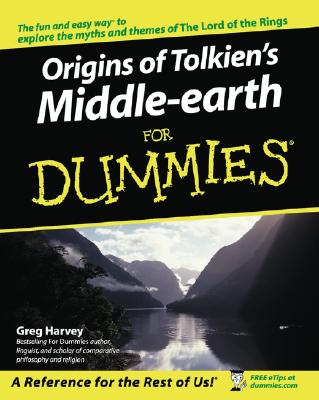 The Origins of Tolkien's Middle-Earth for Dummies

J.R.R. Tolkien's novels of Middle-earth - The Hobbit, The Lord of the Rings trilogy, and The Silmarillian - have become some of the most famous, and most beloved, literary works of the twentieth century. And the Lord of the Rings films by director Peter Jackson have re-ignited interest in Tolkien and his works, as well as introduced his stories to a new generation of fans.

Even if you've never read the novels and have only seen the films, you know that the world of Middle-earth is a complicated one. Tolkien took great care in representing this world, from creating new languages to including very particular cultural details that add to the richness of the world's fabric. Many other books have been written about Tolkien and his works, but none have come close to providing the kind of reference needed to comprehend the world of Middle-earth. That's what veteran Dummies author and unabashed Tolkien fan Greg Harvey attempts to do in The Origins of Tolkien's Middle-earth For Dummies.

As the author says in his introduction to the book, this is not an encyclopedia or quick guide to all the diverse beings, languages, and history that make up Tolkien's Middle-earth. Nor is it a set of plot outlines for the novels. Rather, what you'll find in The Origins of Tolkien's Middle-earth For Dummies is a basic guide to some of the possible linguistic and mythological origins of Middle-earth, plus a rudimentary analysis of its many themes and lessons for our world. This book can help enrich your reading (or re-reading) of Tolkien's novels, and it will challenge you to think about the themes inherent in Tolkien's Middle-earth and their implications in your own life.

So, whether you're reading Tolkien's novels or watching the films for the first time, or you've been a fan for many years and are looking for a new take on Tolkien's works, The Origins of Tolkien's Middle-earth For Dummies can help you enhance your reading or viewing experience for years to come.

Greg Harvey is a language scholar who has traced the roots of Tolkien's work in European folklore and pre-Christian religious beliefs. He has studied 12 languages, including Elvish, Latin, and Anglo-Saxon.
Loading...
or
Not Currently Available for Direct Purchase