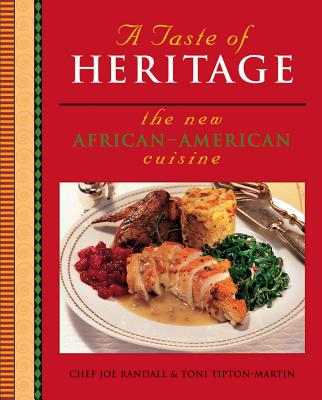 A Taste of Heritage

Chef Joe Randall and Toni Tipton-Martin showcase the rich heritage of African-American cooking in this authentic collection of 300 recipes. Drawn from Joe Randall's personal recipes, the book also includes recipes from chefs who have worked with Randall's A Taste of Heritage Foundation, including Edna Lewis and Patrick Clark.

African-American cooking has evolved over more than 200 years to become a sophisticated and distinctive cuisine. More than just "soul food," African-American cuisine has become world class. Experience Catfish Stew with Cornmeal Dumplings, Southern Fried Quail, or Crepes with Country Fried Apples. Geared to the home cook, the recipes are also enhanced by a section of menus, complete with wine selections. The final section introduces readers to the stories and menus of the prominent African-American chefs who contributed to the book.

Praise For A Taste of Heritage: The New African American Cuisine…

"...showcases the rich heritage of African-American cooking in an authentic collection of 300 recipes." (Publishers Weekly, December 8, 2003)

TONI TIPTON-MARTIN is the first African-American editor of a major metropolitan daily newspaper, the Cleveland Plain Dealer. Formerly a member of the food staff of the Los Angeles Times, she lives in Dallas, Texas.

Chef JOE RANDALL is a preeminent American chef. He has been the executive chef for a dozen restaurants, including the award-winning Closter restaurant in Buffalo, New York, and Fishmarket in Baltimore, Maryland. His affiliations include the American Culinary Federation, the Chefs de Cuisine Association of California, and the American Academy of Chefs. He is the founder and president of A Taste of Heritage Foundation, an organization devoted to introducing African-American chefs to a wider audience and supporting beginning chefs.
Loading...
or support indie stores by buying on