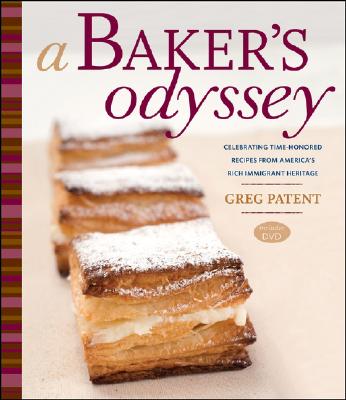 "In this book, I'm embarking on a different path, focusing on finding recipes that preserve the tastes and memories of a long-departed place."

A Baker's Odyssey is a rich collection of recipes and culinary history, all gleaned from Patent's exhaustive research in the American home kitchens of immigrants from around the world. Through his travels across the country, Patent learned the secrets to traditional baked goods originating from thirty-two different nations. From Scotland and Austria to India and Thailand to Mexico, Norway, and West Africa, the recipes represent the best of each culture's beloved culinary traditions. Chapters are organized by categories of baked goods, and include Fried Pastries and Doughs, Flatbreads and More, Savory Pastries, Sweet Pastries, Savory Yeast Breads and Pies, Sweet Yeast Breads, Cookies and Cookie-Like Pastries, and Dessert Cakes, Tortes, and Pies. Patent provides detailed information on the origin of each recipe and its ingredients, and gives a real sense of the cultural heritage behind each dish. Recipes are easy enough for home cooks of any level to master, and include everything from Jewish Matzoh, Eastern European Rugelach, and Sweet Irish Soda Bread to Russian Meat Piroshki, Italian Pignoli Cookies, and Chinese-Style Almond Sponge Cake. The book is accompanied by an hour-long DVD in which Patent provides hands-on instruction in making Strudel, Pretzels, Cannoli, Kransakake, and much more.

GREG PATENT was born in Hong Kong, spent his early childhood in Shanghai, and immigrated to the United States with his family when he was eleven. He earned a PhD from the University of California at Berkeley and became a full professor of zoology at the University of Montana before leaving to pursue a career in cooking, his first love. He is a veteran baker, cooking teacher, and cookbook author whose books include the James Beard Award-winning Baking in America, which was also named "Best of the Best" by Food & Wine magazine. He was a longtime contributing editor to "Cooking Light" and also has written articles for "Gastronomica" and "Fine Cooking." He lives in Missoula, Montana, with his wife, Dorothy.Photographer KELLY GORHAM began his professional career in 1995 after earning a bachelor's degree in photography from Montana State University. He has since worked as a staff photographer for newspapers in Montana and Nevada and as a corporate photographer in the Seattle area. Since 2003, he has been a freelance photographer based from his home state of Montana.Videographer DAVID McLEAN has worked in film and video production for more than thirty years. He has worked in broadcast television as a production manager and producer. He has also filmed footage for CBS, NBC, ABC, PBS, and the ZDF network in Germany and worked as a freelance producer for wildlife and outdoor programs. He produced, shot, and edited a series of twenty-six half-hour cooking shows for TV sponsored by Cuisinart.
Loading...
or
Not Currently Available for Direct Purchase