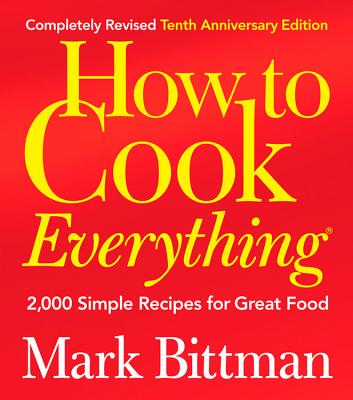 How to Cook Everything (Completely Revised 10th Anniversary Edition)

Mark Bittman's award-winning How to Cook Everything has helped countless home cooks discover the rewards of simple cooking. Now the ultimate cookbook has been revised and expanded (almost half the material is new), making it absolutely indispensable for anyone who cooks—or wants to. With Bittman's straightforward instructions and advice, you'll make crowd-pleasing food using fresh, natural ingredients; simple techniques; and basic equipment. Even better, you'll discover how to relax and enjoy yourself in the kitchen as you prepare delicious meals for every occasion. Look for a new, fully revised edition of HOW TO COOK EVERYTHING, 20th anniversary ed, with full color photos and updated recipes, coming in October 2019!

"A week doesn't go by where I don't pull How to Cook Everything down from the shelf, so I am thrilled there's a new, revised edition. My original is falling apart!"
—Al Roker

"This new generation of How to Cook Everything makes my 'desert island' cookbook choice jacked up and simply universal. I'll now bequeath my cookbooks to a collector; I need only this one."
—Mario Batali

"Mark Bittman has done the impossible, improving upon his now-classic How to Cook Everything. If you need know-how, here's where to find it."
—Bobby Flay

"Mark Bittman is a great cook and an incredible teacher. In this second edition, Mark has fine-tuned the original, making this book a must for every kitchen."
—Jean-Georges Vongerichten

"Throw away all your old recipes and buy How to Cook Everything. Mark Bittman's recipes are foolproof, easy, and more modern than any others."
—Isaac Mizrahi

"Generous, thorough, reliable, and necessary, How to Cook Everything is an indispensable reference for both experienced and beginner cooks."
—Mollie Katzen, author of the Moosewood Cookbook

"I learned how to cook from How to Cook Everything in a way that gives me the freedom to be creative. This new edition will be my gift to new couples or for a housewarming; if you have this book, you don't really need any others."
—Lisa Loeb, singer/songwriter


Praise For How to Cook Everything (Completely Revised 10th Anniversary Edition): 2,000 Simple Recipes for Great Food…

Bittman's How To Cook Everything , originally published in 1998, became an almost instant classic and has sold close to two million copies. This new edition has been reorganized and includes 500 new recipes and many more step-by-step illustrations. Each chapter now opens with "essential recipes" that should be in every cook's repertoire, and there are dozens of new charts and lists throughout. Vegetarian recipes are marked with a special icon, and quick recipes-Bittman also writes "The Minimalist" column for the New York Times -and those that can be made ahead are similarly denoted; prep times are also given for all recipes. Since he wrote the first edition, Bittman has published The Best Recipes in the World and How To Cook Everything Vegetarian ; in this tenth anniversary edition, there are more recipes from cuisines around the world and more vegetarian recipes than in the original. Valuable as both a reference and a cookbook, this is an essential purchase. (Library Journal, September 15, 2008)

“…the best-value all-in-one volume available...even with more of everything to cook, this massive tome is navigable. Whether the first edition is on their shelves or not, home cooks of all skill levels will want to get this one.” (Publishers Weekly, September 1, 2008)