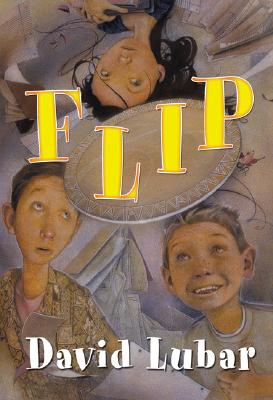 If you could become anyone in the world...who would you be?

For Ryan and Taylor McKenzie the answer is simple: anyone but me!

Eighth-graders Taylor and Ryan are twins. But that's where the similarities end.

Ryan never met a test he couldn't fail. Give him a foot, he'll take an inch. Given half a chance, there isn't anything he won't screw up. According to his teachers and parents, Ryan is the Big Disappointment.

Taylor, on the other hand, always turns in her homework on time. She's the perfect student. Her idea of fun is reading entries from the encyclopedia or planning long trips to the museum.

But lately Taylor and Ryan share at least one thing in common: nothing seems to be working out as they planned. It's like the rules have changed, and nobody told them what the new rules are. No matter who you are, everyone wants you to be someone else.

They may have found an answer: mysterious disks that magically allow them to transform - to "flip" - into legendary figures from the past. Hercules. Cleopatra. Amelia Earhart. Einstein. The possibilities are endless!

Who knew being a hero could be so easy!

But as Ryan and Taylor will discover, it's being yourself that is really hard.

David Lubar created a sensation with his debut novel, "Hidden Talents," an ALA Best Book for Young Adults. Thousands of kids and educators across the country have voted "Hidden Talents" onto over twenty state lists. David is also the author of "True Talents," the sequel to "Hidden Talents"; five short story collections: "In the Land of the Lawn Weenies," "Invasion of the Road Weenies," "The Curse of the Campfire Weenies," "The Battle of the Red Hot Pepper Weenies," and "Attack of the Vampire Weenies"; and the Nathan Abercrombie, Accidental Zombie series. Lubar grew up in Morristown, New Jersey, and he has also lived in New Brunswick, Edison, and Piscataway, NJ, and Sacramento, CA. Besides writing, he has also worked as a video game programmer and designer. He now lives in Nazareth, Pennsylvania.
Loading...
or
Not Currently Available for Direct Purchase