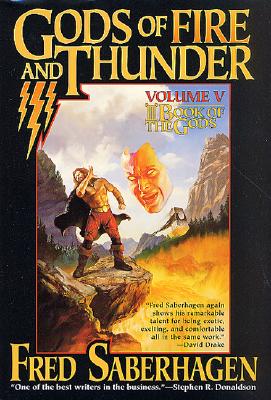 Gods of Fire and Thunder

In the first four volumes of the Book of the Gods, Fred Saberhagen brought a new perspective to the classic gods of Greek mythology. Now the legendary creator of the Berzerker and Lost Swords sagas turns his gaze northward toward an entirely different pantheon of immortal deities . . . the fearsome and ferocious gods of Valhalla.

Haraldur the Northman once joined Jason on his fabled quest for the Golden Fleece, but now he wants nothing more to do with gods and adventure. Returning to his homeland for the first time in many years, he hopes only to settle down on a farm of his own-until he comes across an impenetrable wall of eldritch fire and a lovesick youth determined to breach the wall at any cost.

Behind the towering flames, he is told, lies a beautiful Valkyrie trapped in an enchanted sleep, as well as, perhaps, a golden treasure beyond mortal reckoning. It is the gold that tempts Hal to agree, against his better judgment, to assist the youth in his quest.

But to find away past the fiery wall, they must first brave gnomes, ghosts, and the wrath of the gods themselves. For a mighty battle is brewing, and Hal soon finds himself caught up in a celestial conflict between Thor the Thunderer, Loki the Trickster, and, most powerful of all, Wodan, the merciless Lord of Battles!


Praise For Gods of Fire and Thunder…

"An original take on the famous story, filled with action and excitement, and a fresh look at the ancient world and the legends that haunted it."-Science Fiction Chronicle on the Book of the Gods

"Fred Saberhagen's Book of the Gods series offers a unique blend of myth and modernity, with plenty of new takes on ancient and exciting narrative."-Poul Anderson

"Saberhagen offers classical scholarship, wit, and a brisk sense of pacing in this coming-of-age story that should appeal to readers unfamiliar with the Swords books and attract Swords familiar readers in swarms."-Booklist on the Book of the Gods