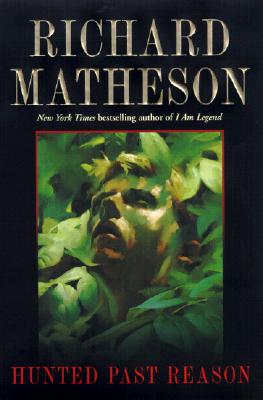 The bestselling author of such classic novels as I Am Legend and What Dreams May Come, Richard Matheson is one of the twentieth century's acknowledged masters of suspense. Hunted Past Reason is a major literary event: Matheson's first new novel in seven years-and a gripping tale of madness, paranoia, and murder.

It's supposed to be just an ordinary camping trip, two old acquaintances hiking through the wilderness toward a remote cabin in the woods of northern California. Bob Hansen, a middle-aged family man and author, isn't anticipating anything worse than sore muscles and maybe a few chilly nights.

But the enforced isolation of the hike soon exposes long-hidden rivalries and resentments between Bob and his guide through the forest, a fading TV actor whom Bob has known for several years. The deeper they get into the primeval wilderness and the farther from civilization, the greater the tension between the two men becomes-until the simmering hostility erupts into a terrifying life-or-death struggle for survival.

Two men entered the woods, but only one may emerge alive. Hunted Past Reason is a nail-biting thriller in the classic Matheson tradition.

Praise For Hunted Past Reason…

"The author who influenced me the most as a writer was Richard Matheson."--Stephen King

"Perhaps no author living is as responsible for chilling a generation with tantalizing nightmare visions. . . ."--The New York Times

Richard Matheson is the author of numerous classic novels, including "I Am Legend, The Incredible Shrinking Man, Somewhere in Time, Hell House, What Dreams May Come, A Stir of Echoes, The Beardless Warriors, Now You See It, "and "Seven Steps to Midnight." Many of his acclaimed short stories were recently collected in "Nightmare at 20,000 Feet," while his metaphysical views can be found in a volume titled "The Path." A Grand Master of Horror and past winner of the Bram Stoker Award for Lifetime Achievement, Matheson has also won the Edgar, the Spur, and the Writer's Guild Award.

He lives in Calabasas, California.
Loading...
or
Not Currently Available for Direct Purchase