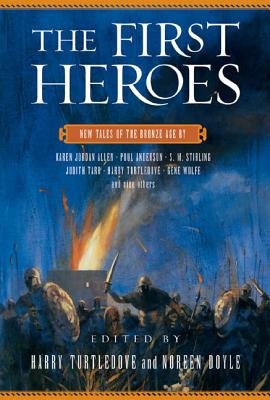 New Tales of the Bronze Age

The Bronze Age. The era of Troy, of Gilgamesh, of the dawning of human mastery over the earth. For decades, fantasists have set tales of heroism and adventure in imagined worlds based on the real Bronze Age, from the "Hyborean Age" of the Conan stories to the Third Age of Middle-earth.

Now bestselling science fiction and fantasy author Harry Turtledove, a noted expert on the ancient world, teams up with author and Egyptologist Noreen Doyle to present fourteen new tales of the real Bronze Age from some of the best writers in science fiction.

In The First Heroes: here is Gene Wolfe's mock-journal of a man from the future who travels with figures out of history and mythology; Judith Tarr's tale of a town that sends its resident goddess to try to learn the secrets of the morose God of Chariots; Harry Turtledove's story about mythological beings witnessing the devastating effect of the first humans on the Earth's natural order; and a poignant new story from the late Poul Anderson, in which a modern scholar is sent to the late Bronze Age to witness the end of an era, emerging with memories from the past as vibrant and intact as those from his accustomed life.


Praise For The First Heroes: New Tales of the Bronze Age…

“Some tales are more curious or erudite than gripping, but not one is less than readable. Kudos to a book to which lovers of historical fiction, fantastic and not, should be directed.” —Booklist on The First Heroes

“One of the best new anthologies to appear so far this century.” —Amazing Stories on The First Heroes

“...A strong collection.... Plentiful barbaric splendor, the excitement of conceptual breakthrough, and the death of civilizations on a copious scale--ideal material for ambitious science fantasy, whether colorful or somber.” —Locus on The First Heroes

“Readers will find some of these stories... amount to beautiful and durable artifacts.” —Publishers Weekly on The First Heroes

“All the stories are well above average, and there are several standouts.... Ancient history buffs and alternate history fans will love this collection, which offers a unique opportunity to view the past as it might have been.” —Romantic Times, 4 stars, on The First Heroes

Harry Turtledove (he/him) is an American fantasy and science fiction writer who Publishers Weekly has called the "Master of Alternate History." He has received numerous awards and distinctions, including the Hugo Award for Best Novella, the HOMer Award for Short story, and the John Esthen Cook Award for Southern Fiction. Turtledove’s works include the Crosstime Traffic, Worldwar, Darkness, and Opening of the World series; the standalone novels The House of Daniel, Fort Pillow, and Give Me Back My Legions!; and over a dozen short stories available on Tor.com. He lives in Los Angeles with his wife, novelist Laura Frankos, and their four daughters.

Lecturer, fiction writer, archaeologist, and Egyptologist, Noreen Doyle lives in Maine. She is the co-editor of The First Heroes with Harry Turtledove.
Loading...
or support indie stores by buying on