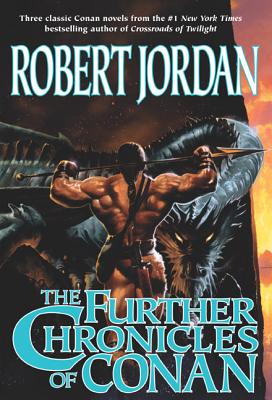 The Further Chronicles of Conan

Conan the Magnificent, Conan the Triumphant, and Conan the Victorious

Robert Jordan, international bestselling author of The Wheel of Time series, has been called the greatest writer ever to tell the stories of Conan the Barbarian. Now his three most breathtaking chronicles are available in trade paperback for the very first time, certain to delight Jordan and Conan fans everywhere.

In Conan the Magnificent, our hero is stalked amid the savage crags of the Kezankian Mountains, caught between rival armies as the sultry huntress Jondra closes in. In Conan the Triumphant, he enters the service of the sumptuous Lady Synelle, unaware that she is the secret high priestess of the demon god Al'Kirr. In the third chronicle, Conan faces his most terrifying adversary yet -- the Sinani, demon-guardians of the ancient tomb of the Vendhyan kings. He must first seek out an antidote to the unknown poison coursing through his veins, then resist the charms of the voluptuous noblewoman Vyndra if he is to be . . . Conan the Victorious.


Praise For The Further Chronicles of Conan: Conan the Magnificent, Conan the Triumphant, and Conan the Victorious…

"For all their careful plotting and world building, Jordan's Conan tales are delightfully implausible, filled with rousing descriptions of extravagant physical feats and willing women. His action-packed novels add few new nuances to Conan's character, but they make an entertaining continuation of his adventures, and enjoyable fare for Jordan fans." —Publishers Weekly