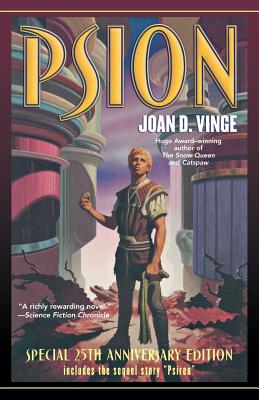 The 25th Anniversary Edition of the first "Cat" novel by bestselling author Joan D. Vinge. Psion is action-adventure cyberpunk at its highest level

When first published, readers young and old eagerly devoured the tale of a street-hardened survivor named Cat, a half-human, half-alien orphan telepath. Named an ALA Best Book for Young Adults, Cat's story has been continued by Hugo-award winning and international best-selling author Joan D. Vinge with the very popular Catspaw and Dreamfall. Now, 25 years later, this special anniversary edition of Psion contains a new introduction by the author and "Psiren," a story never before included in any trade edition of Psion.

This tough, gritty tale of an outsider whose only chance for redemption is as an undercover agent for an interstellar government that by turns punishes and helps him, is as fresh and powerful today as it was in 1982.

“One of the most impressive practitioners in the genre.” —Science Fiction Chronicle on Joan Vinge