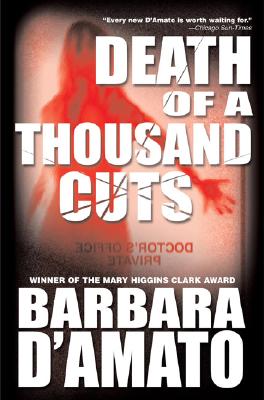 Death of a Thousand Cuts (Hardcover)

The Hawthorne House was once known for its remarkable success rate with autistic children. Now, fifteen years after it closed former residents have returned to Hawthorne House for their first-ever reunion. But the gala event turns into a bloody nightmare when the House's revered founder, Dr. Jay Schermerhorn, is found tortured to death in the mansion's basement.
Schermerhorn had enjoyed a worldwide reputation for his innovative methods and compassionate treatment of autistic children. How could anyone have hated him enough to kill him? As Chicago detectives probe deeply into the history of Hawthorne House, a troubling picture emerges--of a man who inspired both fear and hatred in the children and families who came to him for help.

Barbara D'Amato has had a checkered career, working in the distant past as an assistant surgical orderly, carpenter for stage magic illusions, assistant tiger handler, stage manager, researcher for attorneys in criminal cases, and recently sometimes teaching mystery writing to Chicago police officers.

"Writing is the greatest job of all," D'Amato says. "I get to hang around with cops, go ask people questions about their jobs that I would be too chicken to ask without a reason, and walk around Chicago looking for good murder locales. Best of all, I get to read mystery and suspense novels and call it keeping up with the field."

She was the 1999-2000 president of Mystery Writers of America. D'Amato is also a past president of Sisters in Crime International.

D'Amato is a playwright, novelist, and crime researcher. Her research on the Dr. John Branion murder case formed the basis for a segment on "Unsolved Mysteries," and she appeared on the program. Her musical comedies, "The Magic Man" and children's musical "The Magic of Young Houdini," written with husband Anthony D'Amato, played in Chicago and London. Their Prohibition-era musical comedy "RSVP Broadway," which played in Chicago in 1980, was named an "event of particular interest" by "Chicago" magazine. A native of Michigan, she has been a resident of Chicago for many years.

Praise For Death of a Thousand Cuts…

"Compelling reading."--Chicago Sun-Times on Death of a Thousand Cuts

"Absorbing . . . humor, and characters with real depth . . .poignant."--Publishers Weekly on Death of a Thousand Cuts

"Ingenious. A wonderful feature here is the way the house itself serves as trap, puzzle, and character."--Booklist on Death of a Thousand Cuts

"A fascinating glimpse into a world few novelists would have the sensitivity to explore."--Kirkus Reviews on Death of a Thousand Cuts