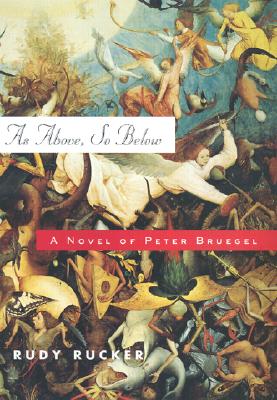 As Above, So Below (Hardcover)

A Novel of Peter Bruegel

Rudy Rucker is an author whose writing thus far has been devoted to nonfiction about science and to genre fiction. He has won awards and achieved a substantial reputation in those fields. But he also has a long-standing fascination with the paintings of one of the great European artists, an interest that has led him to visit museums around the world and to investigate the facts of the artist’s life.

Pieter Bruegel's paintings—a peasant wedding in a barn, hunters in the snow, a rollicking street festival, and many others—have long defined our idea of everyday life in sixteenth-century Europe. They are classic icons of a time and place in much the same way as Norman Rockwell's depictions of twentieth-century America. We know relatively little about Bruegel, but after years of research, novelist, mathematician, and art lover Rudy Rucker has taken what is known and imagined for us the life and world of a master who never got old.

In sixteen chapters, each headed by a reproduction of one of the famous works, Rucker brings Bruegel's painter's progress and his colorful world to vibrant life, doing for Bruegel what the bestselling Girl with A Pearl Earring did for Vermeer. We follow the artist from the winding streets of Antwerp and Brussels to the glowing skies and decaying monuments of Rome and back. He and his friends, the cartographer Ortelius and Williblad Cheroo, an American Indian, are as vivid on the page as the multifarious denizens of Bruegel's unforgettable canvases.

Here is a world of conflict, change and discovery, a world where Carnival battles Lent every day, recorded for us forever by the enigmatic and engaging genius readers will meet in the pages of As Above So Below.

Rudy Rucker is a mathematician, computer scientist, professor and writer who has twice won the Philip K. Dick Award for best SF paperback original, and has published a number of successful popular books on mathematical subjects, including "The Fourth Dimension" and "Infinity and the Mind." He lives in Los Gatos, California.

Praise For As Above, So Below: A Novel of Peter Bruegel…

“Whether he’s investigating the fractalized cutting edge of science and math theory, or traveling through Tonga and Tokyo, it’s hard to think of a more genial, or more well-informed, tour guide. And like his idol Kerouac, Rucker’s a hell of a reporter.”--- American Book Review

“This is Rudy Rucker having fun, the purpose of life. In Seek! he’s picked a brilliant bunch of his columns, essays, and interviews, a travelogue of discovery from cellular automata to his ‘transreal’ fiction. So this is how to be a professor of computing science, write acclaimed nonfiction, become a hit with the cyberpunks, and have an excellent time.”--- New Scientist