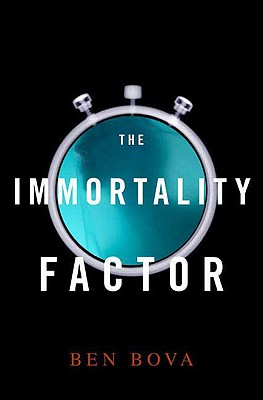 Some see stem-cell research as mankind’s greatest scientific breakthrough. Others see a blasphemous attempt to play God. Suddenly, the possibility of immortality exists. Two brothers, both doctors, stand on opposite sides of the controversy. To Dr. Arthur Marshak, his work is a momentous gift to humanity. To Dr. Jessie Marshak, it is a curse. Between them stands a beautiful, remarkable woman both brothers will do anything to save.

Somehow, before it’s too late, Arthur and Jessie Marshak must bridge the gap that divides them…on an issue that could mean nothing less than life or death for millions.

Praise For The Immortality Factor…

“[A] cautionary but hopeful thriller… modern twists and a genuinely surprising ending.” —Publishers Weekly on The Green Trap


“Ben Bova’s latest near-future SF thriller supplies a suspenseful ride and plenty of high-tech hardware as it builds to a climactic confrontation over Washington, DC.” —Publishers Weekly on Powersat “Bova proves himself equal to the task of showing how adversity can temper character in unforeseen ways.” —The New York Times

A six-time winner of the Hugo Award, a former editor of "Analog," former editorial director of "Omni," and past president of the National Space Society and the Science Fiction Writers of America, Ben Bova is the author of more than a hundred works of science fact and fiction. He lives in Florida.
Loading...
or
Not Currently Available for Direct Purchase