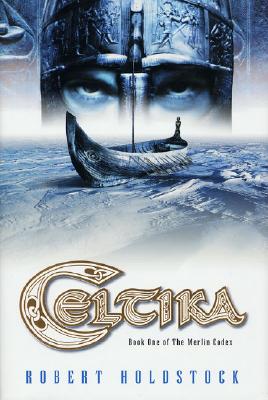 Centuries before he meets Arthur, Merlin wanders the earth, eternally young, a traveler on the path of magic and learning. During his journeys he encounters Jason and joins his search for the Golden Fleece. It is a decision that will cost him dear...

Hundreds of years later, Merlin hears of a screaming ship in a northern lake and divines that it is the Argo...that Jason still screams out for his sons, stolen by the enchantress Medea and thought dead. But death is not the end, and Merlin's trek to the north leads to the revival of both man and ship, and a new quest, with new companions-to find Jason's sons.

Roving from the frozen north to the blighted island that will become Arthur's realm, from the deep forests of ancient Britain to the sun-washed shores of ancient Greece, Merlin's journey is an epic tale of mystery and enchantment. Celtika begins a retelling of the Arthurian legend unlike any other.

"Rob Holdstock's is one of the voices at the very heart of modern fantasy."--Guy Gavriel Kay

"No other author has so successfully captured the magic of the wildwood." --Michael Moorcock

"A writer of both heart and fire."--Peter F. Hamilton

Robert Holdstock's novels include" Mythago Wood," which won the World Fantasy Award; "Lavondyss"; and" Gate of Ivory." He lives in London.
Loading...
or
Not Currently Available for Direct Purchase