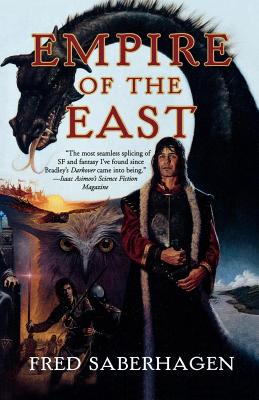 Empire of the East

In the distant future, society has crumbled. Dark forces now rule the land, keeping all humans under their oppressive thumbs.
In the darkness of the shadows and whispered on the winds, there is talk of a rebellion. In the swamps, a small band has formed. Determined to regain their freedom, the rebellion, heavily outnumbered, plans to overthrow an army of thousands . . . with the help of one incredible weapon.
It is only a legend, a story left over from the Old World before magic and the wizards came to the land. A weapon of technology. It is the mystical Elephant, and whoever masters it holds the key to freedom, or defeat.
One young man, determined to avenge the death of his family, sets out to join the rebellion and find Elephant. What he discovers will change everything.

Fred Saberhagen (1930-2007) is the author of the popular Berserker (tm) Series, the Dracula series and the bestselling Lost Swords and Book of Lost Swords.
Loading...
or support indie stores by buying on