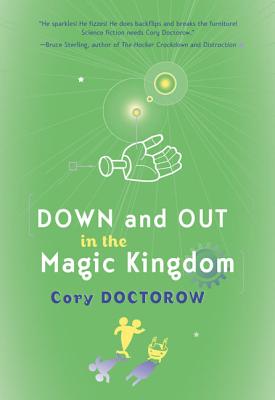 Bursting with cutting-edge speculation and human insight, Cory Doctorow's Down and Out in the Magic Kingdom is a coming-of-age romantic comedy and a kick-butt cybernetic tour de force


Praise For Down and Out in the Magic Kingdom…

“He sparkles! He fizzes! He does backflips and breaks the furniture! Science fiction needs Cory Doctorow.” —Bruce Sterling, author of The Hacker Crackdown and Distraction

“This is science fiction for the non-SF reader as well as for hardcore fans of the genre--think Carl Hiassen crossed with Philip K. Dick, with just a dash of Disney magic” —Kathryn Lively, author of Saints Preserve Us

“In a world of affluence and immortality, the big battles will be fought over culture, not politics. That's the starting-point of Wired contributor Doctorow's daring novel.... Few challenges to copyright giants are as entertaining as this book.” —Wired