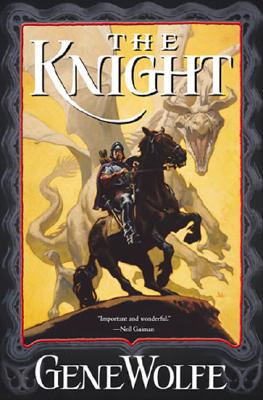 Book One of The Wizard Knight

A young man in his teens is transported from our world to a magical realm that contains seven levels of reality. Very quickly transformed by magic into a grown man of heroic proportions, he takes the name Able and sets out on a quest to find the sword that has been promised to him, a sword he will get from a dragon, the one very special blade that will help him fulfill his life ambition to become a knight and a true hero.
Inside, however, Able remains a boy, and he must grow in every sense to survive the dangers and delights that lie ahead in encounters with giants, elves, wizards, and dragons. His adventure will conclude next year in the second volume of The Wizard Knight, The Wizard.
Gene Wolfe is one of the most widely praised masters of SF and fantasy. He is the winner of the World Fantasy Award for Life Achievement, the Nebula Award, twice, the World Fantasy Award, twice, the John W. Campbell Memorial Award, the British Fantasy Award, and France's Prix Apollo. His popular successes include the four-volume classic The Book of the New Sun.
With this new series, Wolfe not only surpasses all the most popular genre writers of the last three decades, he takes on the legends of the past century, in a work that will be favorably compared with the best of J. R. R. Tolkien, E. R. Eddison, Mervyn Peake, and
T. H. White. This is a book---and a series---for the ages, from perhaps the greatest living writer in (or outside) the fantasy genre.

Gene Wolfe has been called "the finest writer the science fiction world has yet produced" by "The Washington Post." A former engineer, he has written numerous books and won a variety of awards for his SF writing. He and his wife, Rosemary, make their home in Barrington, IL.
Loading...
or
Not Currently Available for Direct Purchase