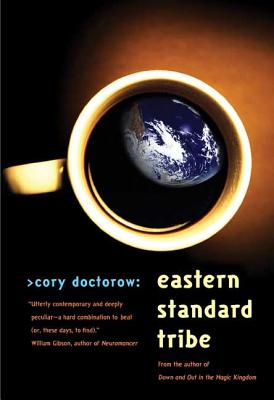 A comedy of loyalty, betrayal, sex, madness, and music-swapping
Art is an up-and-coming interface designer, working on the management of data flow along the Massachusetts Turnpike. He's doing the best work of his career and can guarantee that the system will be, without a question, the most counterintuitive, user-hostile piece of software ever pushed forth onto the world.

Why? Because Art is an industrial saboteur. He may live in London and work for an EU telecommunications megacorp, but Art's real home is the Eastern Standard Tribe.

Instant wireless communication puts everyone in touch with everyone else, twenty-four hours a day. But one thing hasn't changed: the need for sleep. The world is slowly splintering into Tribes held together by a common time zone, less than family and more than nations. Art is working to humiliate the Greenwich Mean Tribe to the benefit of his own people. But in a world without boundaries, nothing can be taken for granted-not happiness, not money, and most certainly not love.

Which might explain why Art finds himself stranded on the roof of an insane asylum outside Boston, debating whether to push a pencil into his brain....

“Artful and confident...Like William Gibson and Bruce Sterling, Doctorow has discovered that the present world is science fiction, if you look at it from the right angle.” —Vancouver Sun

“Bravura...Cory Doctorow writes fast and furiously, the words gushing out of him in a stream of metaphor and imagery that keeps you glued to his futurist tales. You're going to hear a lot more from this guy.” —Toronto Now

“Immediately accessible...Doctorow maintains an unrelenting pace; many readers will find themselves finishing the novel, as I did, in a single sitting.” —Toronto Star

“As in Down and Out, Doctorow shows here that he's got the modern world, in all its Googled, Friendstered and PDA-d glory, completely sussed.” —Kirkus Reviews

“At its heart, Tribe is a witty, sometimes acerbic poke in the eye at modern culture. Everything comes under Doctorow's microscope, and he manages to be both up to date and off the cuff in the best possible way.” —Locus

“Doctorow peppers his novel with technology so palpable you want to order it up on the web. You'll probably get the chance. But technology is not the point here. What is unexpected, shocking even, is how smart Doctorow is when it comes to the human heart, and how well he's able to articulate it....He seems smart because he makes the reader feel smart. When Doctorow talks, when Art argues, we just get it. There's nothing between the language and the meaning. The prose is funny, simple and straightforward. This is a no-BS book.” —NPR

“Utterly contemporary and deeply peculiar--a hard combination to beat (or, these days, to find).” —William Gibson, author of Neuromancer

“I know many science fiction writers engaged in the cyber-world, but Cory Doctorow is a native...We should all hope and trust that our culture has the guts and moxie to follow this guy. He's got a lot to tell us.” —Bruce Sterling

“Cory Doctorow is just far enough ahead of the game to give you the authentic chill of the future...Funny as hell and sharp as steel.” —Warren Ellis, author of Transmetropolitan

“Cory Doctorow knocks me out. In a good way.” —Pat Cadigan, author of Synners

“Bravura...Cory Doctorow writes fast and furiously, the words gushing out of him in a stream of metaphor and imagery that keeps you glued to his futurist tales.” —Toronto Now on Down and Out in the Magic Kingdom