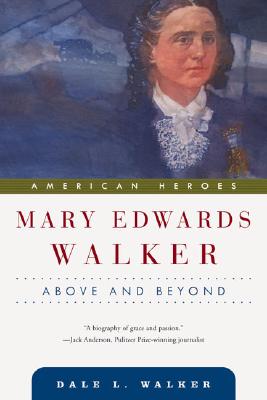 Mary Edwards Walker (1832-1919) defied the conventions of her era. Born and raised on a farm in Oswego, New York, Walker became one of a handful of female physicians in the nation-and became a passionate believer in the rights of women.
Despite the derision of her contemporaries, Walker championed freedom of dress. She wore slacks-or "bloomers" as they were popularly known-rather than the corsets and voluminous ground-dragging petticoats and dresses she believed were unhygenic and injurious to health. She lectured and campaigned for woman's suffrage and for prohibition, and against tobacco, traditional male-dominated marriage vows, and any issue involving the sublimation of her sex.
From the outset of the Civil War, Walker volunteered her services as a physician. Despite almost universal opposition from army commanders and field surgeons, Walker served at Manassas, Fredericksburg, Chancellorsville, Chickamauga, and other bloody theaters of the war. She ministered to wounded and maimed soldiers and civilians on both sides of the conflict. Captured by Confederates near Chattanooga in 1864, she served four months in a Southern prison hellhole where she nursed and tended to wounded prisoners of war.
For her services in the war, in 1865 Mary Edwards Walker was awarded the Medal of Honor, becoming the only woman in American history to receive the nation's highest award for military valor.

Dale L. Walker, a native of Decatur, Illinois, graduated from the University of Texas at El Paso in 1962 with a B.A. degree in journalism. A freelance writer since 1960 Walker specializes in pre-Civil War Western American history, military history, and biography and is author or editor of 21 books, 400 magazine articles, countless reviews, columns, literary studies, and short fiction.

He is a member of Texas Institute of Letters, a four-time winner of the Spur Award from Western Writers of America, Inc., and in 2000 received the Owen Wister Award for lifetime contributions to Western history and literature

Praise For Mary Edwards Walker: Above and Beyond…

"In my 60 years of journalism. I've broken a lot of big stories but I'm green with envy at what Dale Walker has done. He's got the scoop of a lifetime-discovering one of America's greatest unsung heroes, a woman to rank with our greatest soldiers, explorers, and scientists. In a biography of grace and passion, Dale Walker rescues Mary Edwards Walker from the ash-heap of oblivion." --Jack Anderson, Pulitzer Prize-winning journalist

"A remarkable story about an extraordinary woman. A heroine in every sense of the word. Even without the Congressional Medal of Honor, Mary Edwards Walker was a tenacious, determined "Quiet Professional". She ventured or was trust into experiences that few would dare. A great story by a most talented writer." -- Major General Sid Shachnow (U.S. Army, Ret.), author of Hope and Honor

"It's a tragedy that one of America's greatest heroes, a battlefield nurse and winner of the Congressional Medal of Honor, lies unknown in an unvisited grave, and that no one has thought to write a book about her in the 100 years since she died. That Dale Walker has taken up her cause and written a book of such power and passion is a credit to both his skill and humanity. Walker does a profound service to us all-and to Mary Edwards Walker." --David Nevin, New York Times bestselling author of Dream West


"In a biography of grace and passion, Dale Walker rescues Mary Edwards Walker from the ash-heap of oblivion."

"A remarkable story about an extraordinary woman. She ventured or was thrust into experiences that few would dare."

"Walker does a profound service to us all--and to Mary Edwards Walker."

"There are more familiar heroines from the 19th Century--but none were more important in advancing medicine and advocating women's rights than Mary Edwards Walker."