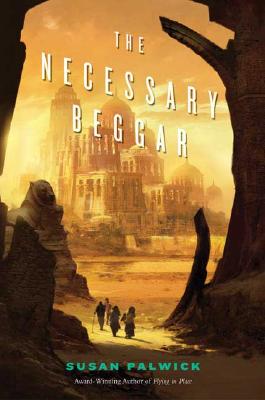 Praised as "a deeply felt, deeply moving tale . . . chilling and finely tuned" ("Publishers Weekly"), Susan Palwick's first novel "Flying in Place" won widespread acclaim for its haunting exploration of a troubled childhood. Now, after a decade, Palwick returns with the powerful tale of a family cast out of an idyllic realm, learning to live in our own troubled world--an exciting and insightful examination of humanity in the spirit of Ursula Le Guin's "The Disposessed" and Robert Heinlein's "Stranger in a Strange Land."
Lemabantunk, the Glorious City, is a place of peace and plenty. But it is also a land of swift and severe justice. Young Darroti has been accused of the murder of a highborn woman who had chosen the life of a Mendicant, a holy beggar whose blessing brings forgiveness. Now his entire family must share his shame, and his punishment--exile to an unknown world.
Grieving for the life they have left behind, Darroti and his family find themselves in a hostile land--an all-too-familiar American future, a country under attack in a world torn by hatred and war. There, each tries to cope in their own way.
Some will surrender to despair. Some will strive to preserve the old ways. Some will be lured by the new world's temptations. And some, sustained by extraordinary love, will find a way to heal the family's grief and give them hope.

Praise For The Necessary Beggar…

"One of the best and most moving novels by a new author I have read in years."
--Alison Lurie on Flying in Place

“Unflinching clarity and great dramatic power...Susan Palwick, a young writer who has hitherto attracted some notice for her stories, poems, and essays, is with Flying in Place a novelist of moment.”--Newsday on Flying in Place

“I read it in one night and a morning train trip, arriving for work dazed, distracted and drinking in the last few pages. It is a deeply moving book. Palwick’s withering understatements of pain are laced with a regret for the lost magic of childhood—even a ruined childhood.” --Geoff Ryman on Flying in Place

“Flying in Place is a bittersweet novel of a dead sister who returns to give our narrator the tools she need to break her family out of the poisonous pattern that is consuming them all. ... beautifully handled ... a wonderful debut for a writer who has proved she can write well in long forms as well as short ones -- may it be the first of many novels from Palwick, each one better than the ones before.”--Orson Scott Card on Flying in Place

“Flying in Place is compelling, wrapping deep-empathy insights in lyric poetry to show us the monster behind the mask.” --Andrew Vachss on Flying in Place