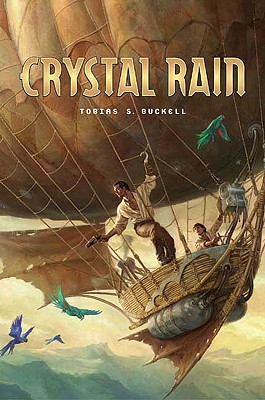 Long ago, so the stories say, the old-fathers came to Nanagada through a worm's hole in the sky. Looking for a new world to call their own, they brought with them a rich melange of cultures, religions, and dialects from a far-off planet called Earth. Mighty were the old-fathers, with the power to shape the world to their liking---but that was many generations ago, and what was once known has long been lost. Steamboats and gas-filled blimps now traverse the planet, where people once looked up to see great silver cities in the sky.
Like his world, John deBrun has forgotten more than he remembers. Twenty-seven years ago, he washed up onto the shore of Nanagada with no memory of his past. Although he has made a new life for himself among the peaceful islanders, his soul remains haunted by unanswered questions about his own identity.
These mysteries take on new urgency when the fearsome Azteca storm over the Wicked High Mountains in search of fresh blood and hearts to feed their cruel, inhuman gods. Nanagada's only hope lies in a mythical artifact, the "Ma Wi Jung, " said to be hidden somewhere in the frozen north. And only John deBrun knows the device's secrets, even if he can't remember why or how
"Crystal Rain" is the much-anticipated debut novel by one of science fiction's newest and most promising talents.

"Crystal Rain is refreshing and imaginative, an exotic stew of cultures, myths, and technology."--Kevin J. Anderson

"There's a nova in the skies: Tobias S. Buckell is a dazzling new voice, and Crystal Rain is an explosive debut. Read it!"--Robert J. Sawyer, Hugo Award--winning author of Hominids

"A cracking adventure yarn from an exciting new writer."--Cory Doctorow, author of Someone Comes to Town, Someone Leaves Town on Crystal Rain

"An alive, exciting story. Crystal Rain is a great launch to Buckell's career as a novelist; more, please!"--Nalo Hopkinson, author of The Salt Roads

"Crystal Rain is refreshing and imaginative, an exotic stew of cultures, myths, and technology."

"There's a nova in the skies: Tobias Buckell is a dazzling new voice, and Crystal Rain is an explosive debut."

"A cracking adventure yarn from an exciting new writer."

"An alive, exciting story. Crystal Rain is a great launch to Buckell's career as a novelist; more, please!"

Tobias S. Buckell is a Caribbean-born speculative fiction writer who grew up in Grenada, the United States, and the British Virgin Islands. He now lives (through many strange twists of fate) in a small college town in Ohio with his wife, Emily.

Buckell was a first-place winner for the Writers of the Future and has been nominated for the John W. Campbell Award for Best New Writer. He is also a graduate of the Clarion Science Fiction Writing Workshop.
Loading...
or
Not Currently Available for Direct Purchase