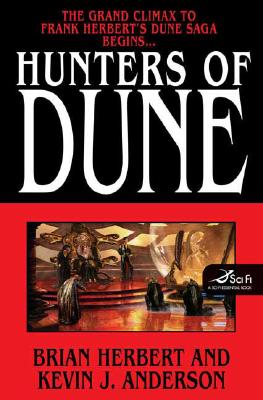 At the end of Chapterhouse: Dune--Frank Herbert's final novel--a ship carrying the ghola of Duncan Idaho, Sheeana (a young woman who can control sandworms), and a crew of various refugees escapes into the uncharted galaxy, fleeing from the monstrous Honored Matres, dark counterparts to the Bene Gesserit Sisterhood. The nearly invincible Honored Matres have swarmed into the known universe, driven from their home by a terrifying, mysterious Enemy. As designed by the creative genius of Frank Herbert, the primary story of Hunters and Sandworms is the exotic odyssey of Duncan's no-ship as it is forced to elude the diabolical traps set by the ferocious, unknown Enemy. To strengthen their forces, the fugitives have used genetic technology from Scytale, the last Tleilaxu Master, to revive key figures from Dune's past--including Paul Muad'Dib and his beloved Chani, Lady Jessica, Stilgar, Thufir Hawat, and even Dr. Wellington Yueh. Each of these characters will use their special talents to meet the challenges thrown at them.

Praise For Hunters of Dune…

"One of the monuments of modern science fiction."--Chicago Tribune on Dune

"I know nothing comparable to it except The Lord of the Rings."--Sir Arthur C. Clarke on Dune

"A portrayal of an alien society more complete and deeply detailed than any other author in the field has managed . . . a story absorbing equally for its action and philosophical vistas. . . . An astonishing science fiction phenomenon."--The Washington Post on Dune

"Powerful, convincing, and most ingenious."--Robert A. Heinlein on Dune

"Herbert's creation of this universe, with its intricate development and analysis of ecology, religion, politics, and philosophy, remains one of the supreme and seminal achievements in science fiction."--Louisville Times on Dune

"The kind of intricate plotting and philosophical musings that would make the elder Herbert proud."--Publishers Weekly (starred review) on Dune: The Butlerian Jihad

"Sit back and enjoy."--Booklist on Dune: The Machine Crusade

Brian Herbert, the author of numerous novels and short stories, has been critically acclaimed by leading reviewers in the United States and around the world. The eldest son of science fiction superstar Frank Herbert, he, with Kevin J. Anderson, is the author of "Hellhole" and continues his father's beloved Dune series with books including "The Winds of Dune," "House Atreides," "Sandworms of Dune," among other bestsellers. He also wrote a biography of his father, "Dreamer of Dune." Herbert graduated from high school at age 16, and then attended U.C. Berkeley, where he earned a B.A. in Sociology. Besides an author, Herbert has been an editor, business manager, board game inventor, creative consultant for television and collectible card games, insurance agent, award-winning encyclopedia salesman, waiter, busboy, maid and a printer. He and his wife once owned a double-decker London bus, which they converted into an unusual gift shop. Herbert and his wife, Jan, have three daughters. They live in Washington state.